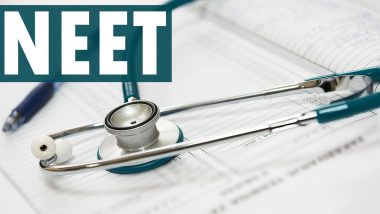 The AIADMK said that it was during the Congress-led UPA regime to which DMK was a constituent partner when the NEET was formulated. AIADMK leaders and former Chief Ministers, O. Panneerselvam and K. Palaniswami countered Chief minister M.K. Stalin that the DMK was not practicing what it preached and that it was the ruling party that had supported the NEET bill in the Parliament when the UPA government moved it. Tamil Nadu Assembly Passes Bill Against NEET Exam Through Voice Vote.

Responding to the allegation, Stalin said there was never an instance of NEET exam being held in Tamil Nadu during the previous DMK government and that it was after Palaniswami became Chief Minister that the exam was held in the state.

The BJP has also taken up NEET as a major issue in the elections stating that it was because of NEET that several students from poor backgrounds got admissions to government Medical colleges in Tamil Nadu.

BJP leader Pon Radhakrishnan, a former Union Minister, told IANS, "NEET has given life to students from poor backgrounds in Tamil Nadu to get admission in government medical colleges in the state which would not have been possible earlier. Centralized system of exams are good for the society and students are benefiting from it." However, with the two Dravidian majors stepping up the campaign centered around NEET, the voice of the BJP has become much feeble and may even backfire.

With NEET taking the centrestage, other contentious issues like the poor quality of materials in the gift hampers for Pongal, failure of the DMK government to provide Rs 1,000 monthly emoluments to women as promised in the assembly elections, have taken a back seat.

M. Periyasamy, AIADMK leader from Erode, told IANS, "We will counter the allegations leveled by the DMK against us vis-a-vis NEET as it was the DMK which was part of the then UPA government that supported formulating NEET in the country, not the AIADMK."

(The above story first appeared on LatestLY on Feb 14, 2022 10:57 AM IST. For more news and updates on politics, world, sports, entertainment and lifestyle, log on to our website latestly.com).