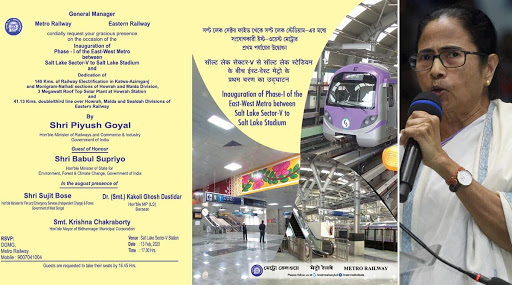 Kolkata, February 19: TMC leaders have decided to skip the inauguration of Phase 1 of the East-West Metro corridor between Salt Lake Sector V to Stadium after Chief Minister Mamata Banerjee's name was missing from the invitation card. The first phase of the East-West Metro corridor connecting Sector V with Salt Lake Stadium in the city will be inaugurated later in the day by Railway Minister Piyush Goyal. The card mentions the event will start at 5 pm on Thursday.

Three leaders including Dr Kakoli Ghosh Dastidar, state Fire and Emergency Services Minister, Sujit Bose and Mayor of Bidhannagar Municipal Corporation Krishna Chakraborty were invited for the inaugural ceremony and their invitation cards were also sent. However, they decided to skip the event as Mamata Banerjee was not sent an invitation for its opening.

Refuting the allegation, the Metro Rail authorities have said that they have sent an official invitation to her, including sending an official to Nabanna Bhavan for a personal invitation. Mamata Banerjee Indirectly Attacks BJP, Says 'Banks, Post Offices Doing Surveys to Collect CAA-NRC Data, No One Should Give Any Information'.

West Bengal CM Mamata Banerjee's name missing from the invitation for the inauguration of Phase I of the East-West Metro corridor between Salt Lake Sector-V to Salt Lake Stadium. #WestBengal pic.twitter.com/FFWcXcaKqE

The East-West Metro corridor project was the brainchild of Mamata Banerjee during her tenure as Railway minister from 2009-2011. It was she who had sanctioned the money in Railway budget. Now, when the project is being inaugurated she has not been invited. This is an insult to the people of Bengal," Dastidar told PTI.