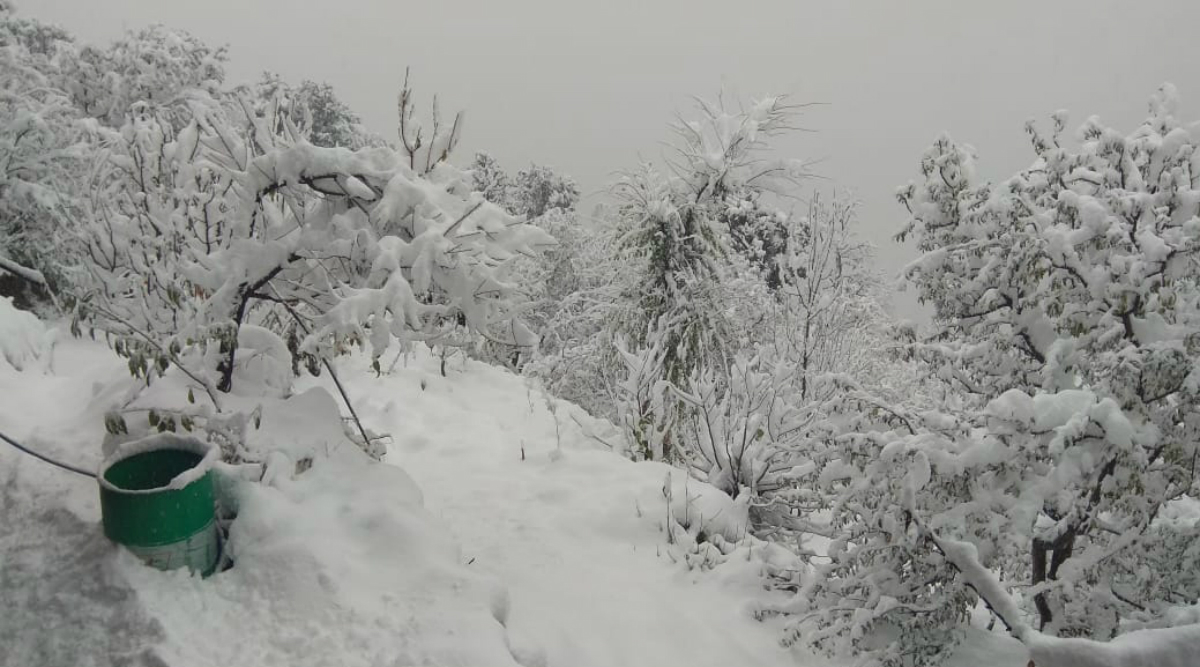 Snowfall ranging from five inches to over three feet has accumulated at various places, especially in Kashmir, which remained cut-off from the rest of the country following the closure of the Jammu-Srinagar national highway for the second day and cancellation of all flights to and fro the Srinagar airport for the seventh day, they said.

"As expected widespread moderate to heavy snowfall occurred in most parts of Jammu, Kashmir and Ladakh and is still continuing. The present condition is likely to prevail for the next 12 to 24 hours," Director, Meteorological Department, Sonam Lotus said.

However, he said the significant improvement in the weather, including visibility in Kashmir, is expected from Saturday onwards, while another spell of lesser intensity is likely to hit the region on December 20-21.

The officials said the Vaishno Devi shrine in Reasi district of the Jammu region witnessed first snowfall of the season, forcing the suspension of the helicopter service to the pilgrim site.

However, the pilgrims continued their journey on foot to pay their obeisance at the shrine. Besides Bhawan, Bahiron Ghati, Sanjichhat and Himkoti and the serpentine route in the shrine area received nearly one feet of snow till this afternoon, the officials said.

After heavy rains on Thursday, the residents of Srinagar woke up to a thick layer of snow, third this season, when it was still continuing. The city had recorded around five inches of snow till Friday afternoon.

The snowfall threw life out of gear as the day temperature in the city plummeted several degrees, while the night temperature also marked a dip to settle at minus 1 degree Celsius, which is, however, normal during this part of the season, the officials said.

They said the snowfall was widespread in Kashmir with the famous ski resort of Gulmarg in north Kashmir and Pahalgam hill resort in south Kashmir recording over two feet of fresh snow. The snowfall forced the closure of the 270-km Jammu-Srinagar national highway for the second day on Friday.

The highway was closed for traffic Thursday evening after heavy snowfall around the Jawahar Tunnel, the gateway to the Kashmir Valley, the officials said, adding over three feet of snow had accumulated on the ground at the tunnel towards the Kashmir side till Friday afternoon when it was still snowing.

They said efforts are on to clear the highway for traffic, but operations are being hampered by continuous heavy snowfall. The air traffic to the valley remained suspended for the seventh consecutive day due to heavy snowfall, an Airports Authority of India official said. The operation had to be cancelled for the past six days due to poor visibility caused by heavy fog.

Jammu, which was lashed by heavy rains since Thursday afternoon, recorded a fall of two degrees in the night temperature which settled at 8.5 degrees Celsius, 0.7 notches down from the season's average, the officials said.

People in the city were seen gathered around roadside bonfires at various places to keep themselves warm in the wake of the continuous rains and chilly conditions.

Two-and-a-half-feet of snow was also recorded in the famous hill resort of Patnitop, the star attraction for tourists visiting Jammu during winter, the officials said.

Leh in Ladakh was the coldest recorded place with a minimum of minus 10.4 degrees Celsius, followed by Drass in Kargil district at minus 6.6 degrees Celsius.

The high altitude areas of Kargil, including Zojilla along the 434-km Srinagar-Leh national highway, recorded heavy snowfall, the officials said.