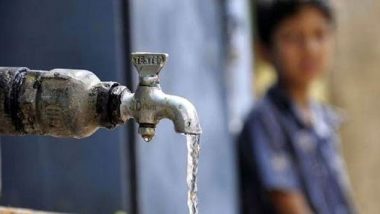 Mumbai, August 28: The cuts in the water supply to Mumbai will be lifted from August 29 onwards, the Brihanmumbai Municipal Corporation (BMC) announced on Friday. The decision was taken after the lakes supplying water to the city crossed 95 percent of their full capacity. On August 19, the civic body had reduced the water cut from the earlier 20 percent to 10 percent as the water stock in the dams supplying water to the city improved to 85 percent.

On August 5, the BMC had imposed the 20 percent water cut in Mumbai from as there was less than 50 percent stock in seven lakes in the metropolis. However, several parts of the city and catchment areas of the dams received good rainfall in the past some days. Mumbai Has Water Stock for 42 Days As 7 Lakes Providing Drinking Water to the City Receive Less Rainfall So Far, BMC Says ‘No Need to Panic’.

Cuts in the water supply to Mumbai will be lifted from tomorrow onwards: Brihanmumbai Municipal Corporation (BMC), Maharashtra

The decision was taken after the lakes supplying water to the city crossed 95 per cent of their full capacity.

Earlier this week, the BMC had said that areas including Thane, Bhiwandi Municipal Corporation and villages that receive water supply from its dams will also benefit from reduced water cut. In the last week, Mumbai Mayor Kishori Pednekar had said the water cut was reduced to 10 percent considering the festival season and the cut will be canceled entirely once the dams have 95 per cent water stock.

(The above story first appeared on LatestLY on Aug 28, 2020 04:37 PM IST. For more news and updates on politics, world, sports, entertainment and lifestyle, log on to our website latestly.com).