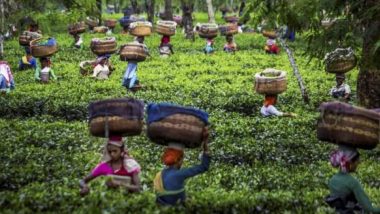 Kolkata, May 30: Chief Minister Mamata Banerjee-led West Bengal government on Saturday allowed deployment of 100 percent workforce in tea gardens from June 1. The decision comes a day after the state government allowed to re-open all religious places in West Bengal. The CM clarified that all mosques, temples, gurudwaras and churches in the state could be visited by devotees from Monday.

Informing about the latest development, the news agency ANI said that the state government has permitted deployment of 100 percent workforce in tea gardens from June 1. Following this, Siliguri Tea Auction Committee Chairman Kamal Tiwari said, "I appreciate this decision. This decision will give employment to many people. Production will increase now". West Bengal Allows Temples, Mosques, Gurudwaras, Other Religious Places to Re-Open From June 1, Only 10 Devotees Allowed Inside at Once.

Siliguri: West Bengal govt has allowed deployment of 100 per cent workforce in tea gardens from June 1. Kamal Tiwari, Chairman, Siliguri Tea Auction Committee says, "I appreciate this decision. This decision will give employment to many people. Production will increase now". pic.twitter.com/OdKH5N6J68

Earlier on Friday, Banerjee permitted to open places of worship belonging to all religious denominations. The Bengal CM, however, added some riders to her announcement. She stated that only a group of 10 persons would be allowed to enter the place of worship at once. Further, no congregations would be permitted at the religious sites till further orders from the government.

In the notifications for first four rounds of lockdown issued so far, the Ministry of Home Affairs (MHA) had not permitted the states or union territories to open up schools, colleges, cinema halls, theatres, malls and places of worships. The prohibition was aimed at preventing mass gatherings -- which is considered as one of the prime reasons for coronavirus transmission.

(The above story first appeared on LatestLY on May 30, 2020 05:30 PM IST. For more news and updates on politics, world, sports, entertainment and lifestyle, log on to our website latestly.com).