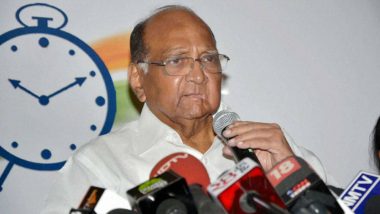 New Delhi, December 3: Nationalist Congress Party (NCP) chief Sharad Pawar, who is considered as the "chanakya" or the architect of the Maha Vikas Aghadi government in Maharashtra, contended to had been jolted by his nephew Ajit Pawar's unprecedented alliance with the BJP in the intervening night of November 20-21. 'PM Narendra Modi Wanted Us to Work Together, I Rejected His Offer,' Says Sharad Pawar.

Pawar, while speaking to a leading news channel, claimed that the entire party was shocked by Ajit Pawar's decision to ally with BJP's Devendra Fadnavis. The next morning, many among them woke up to the news of him being sworn-in as the Deputy Chief Minister.

"Never expected Ajit to join hands with Fadnavis," Pawar told NDTV, adding that he later realised his mistake and returned to the NCP fold. Since he has regretted the move, the party has  not taken action against him, the senior Pawar added.

According to the NCP president, his nephew Ajit was of the view that the Congress was acting as a block in the formation of the Shiv Sena-led government. With the talks process turning prolonged, he thought it was appropriate to join hands with the BJP, Pawar said.

A handful of MLAs were initially supporting Ajit Pawar as they thought the BJP-NCP alliance has been approved by him, the 80-year-old claimed. But the joint press conference he addressed with Shiv Sena chief Uddhav Thackeray, hours after Ajit took oath as Deputy CM, removed all ambiguity, Pawar said.

The NCP chief had on Monday, while speaking to news agency PTI, revealed that Prime Minister Narendra Modi had asked him to join hands with the BJP in the state as well as the Centre. The PM had offered a Union Cabinet berth to Supriya Sule, Pawar's lawmaker-daughter, in addition to the formation of the joint government in Maharashtra.

Pawar said he had turned down Modi's offer despite enjoying "good equation" with him. From his political point of view, an alliance with the BJP was not feasible, the NCP chief told reporters, adding that he had made up his mind to support a Sena-led dispensation in Maharashtra.

(The above story first appeared on LatestLY on Dec 03, 2019 07:18 PM IST. For more news and updates on politics, world, sports, entertainment and lifestyle, log on to our website latestly.com).