Mamata Banerjee is set to retain West Bengal by defeating the BJP. In Tamil Nadu, the DMK-Congress alliance won and MK Stalin is set to become the Chief Minister. The LDF has retained Kerala, while Assam has voted for BJP again. 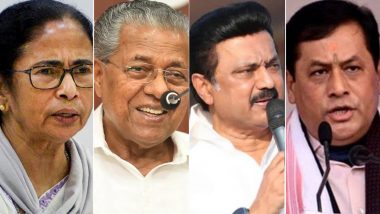 New Delhi, May 2: The Mamata Banerjee-led Trinamool Congress is set to retain West Bengal by defeating the Bharatiya Janata Party in the Vidhan Sabha elections in the middle of a raging pandemic. The chances of the saffron party were mainly dented by the dismal performance of TMC candidates who defected to BJP. Assembly Elections 2021 Results News Updates: TMC Sweeps West Bengal, DMK Gains Victory in Tamil Nadu, BJP Retains Assam, LDF Wins in Kerala, NDA in Puducherry.

Apart from Suvendu Adhikari, whose fate hangs in balance in Nandigram against Chief Minister Mamata Banerjee, all the other Trinamool leaders who had joined the BJP just before the polls suffered defeat.

Of the 34 Trinamool leaders who had joined the BJP, 13 were given tickets and the majority of them lost, including heavyweights like Sabyasachi Dutta, Rajib Banerjee and Rabindranath Bhattacharjee.

However, the Nandigram seat hangs in balance where Suvendu Adhikari is fighting against Mamata Banerjee. The Election Commission kept the counting on hold as both the parties have demanded recounting.

Mamata Banerjee's TMC is leading in 216 of 294 assembly seats in the state and the BJP is likely to finish below 100-mark.

In Tamil Nadu, the DMK-Congress alliance won and MK Stalin, affectionately called "Thalapathi" (Commander) by supporters, is set to become the Chief Minister.

The DMK, led by Stalin, a former Deputy Chief Minister, is all set to come to power after a 10-year hiatus and has even gained a majority on its own. Change of Guard All Set To Take Place After 10 Years As DMK-Led Alliance Coasts Towards Emphatic Victory.

With the successive poll victories - the first one was the 2019 Lok Sabha polls - and now the Assembly polls, Stalin has established himself as an undisputed leader within and outside the party. Currently, DMK and its allies are leading in 149 assembly seats and the AIADMK, in 85.

At the end of the day, the LDF's final tally was the Communist Party of India-Marxist (CPIM) 68, the Communist Party of India (CPI) 17, the Kerala Congress-Mani (KCM) five, the Janata Dal-Secular (JDS) and the Nationalist Congress Party (NCP) two each and the Loktantrik Janta Dal (LJD), the Indian National League (INL), Congress-Secular (CS), the Revolutionary Socialist Party-L (RSPL) and Kerala Congress-B one each.

In a historic win in Assam, the saffron party retained power in the state and became the only non-Congress government to win consecutive terms in the state. The BJP-led National Democratic Alliance (NDA) has won 76 seats while the Congress-led alliance managed to secure only 48 seats.

(The above story first appeared on LatestLY on May 02, 2021 11:41 PM IST. For more news and updates on politics, world, sports, entertainment and lifestyle, log on to our website latestly.com).