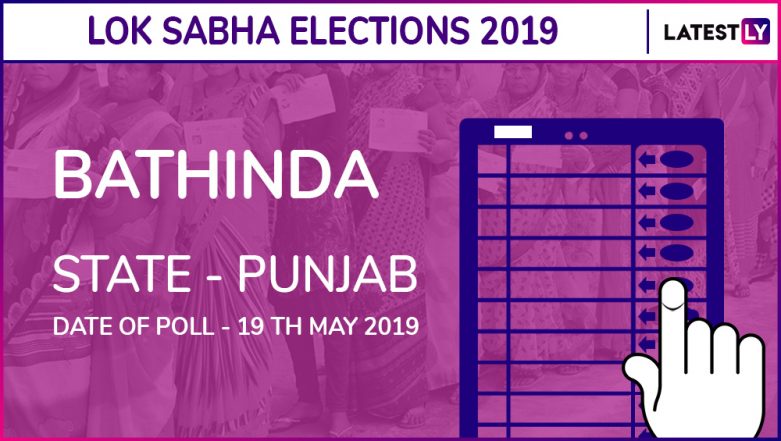 The results of the Bhatinda Lok Sabha Constituency was declared on May 23. Shrimani Akali Dal's (SAD) Harsimrat Kaur Badal won the elections defeating Congress candidate Amarinder Singh Raja. The counting of votes began in the parliamentary seat in Punjab at 8 am on Thursday, May 23. Voting for the Bhatinda seat took place in the seventh and final phase of Lok Sabha Elections 2019 on May 19. Bhatinda is one of the 13 Lok Sabha constituencies of Punjab. The seat is located in the Malwa region of the state. The constituency is not reserved for any category and its constituency number is 11. The Bhatinda Lok Sabha Constituency comprises of nine assembly seats including Bhatinda Urban, Rural, Maur and Talwandi Sabo. Lok Sabha Elections 2019 Schedule: Voting In 7 Phases From April 11 to May 19, Counting And Results On May 23; Check All Dates For General Elections.

Rebel Aam Aadmi Party (AAP) MLA and former leader of opposition in Punjab Assembly, Sukhpal Singh Khaira contested from Bathinda. Meanwhile, The Congress fielded Amarinder Singh Raja, while the Shiromani Akali Dal (SAD) gave the ticket to sitting MP Harsimrat Kaur Badal. The last date of filing nomination for the seat was April 22. The scrutiny of nominations papers took place on April 30. Meanwhile, the last date of withdrawal of candidature was May 2. Lok Sabha Elections 2019 Phase VII: List of States And Constituencies Voting on May 19.

The seat has always been a stronghold of the SAD. The party had won 10 times from this constituency. Harsimrat Kaur Badal is the sitting the MP from Bhatinda. in 2009 too, she won the elections on the SAD ticket. Meanwhile, in 2014, SAD's Paramjit Kaur Gulshan remained victorious from Bhatinda. Lok Sabha Elections 2019: Why Captain Amarinder Singh Can be The Next Prime Minister of India.

List of States And Constituencies That Will Vote On May 19 In Phase VII:

On March 10, the Election Commission of India announced dates for the 2019 Lok Sabha elections. The elections will take place in seven phases, and the results will be declared on May 23. A total of 900 million voters have been registered in 2019 as compared to 814.5 million in 2014.