The NDA is likely to retain power in the upcoming Bihar assembly elections, according to an opinion poll conducted by Times Now-C Voter. 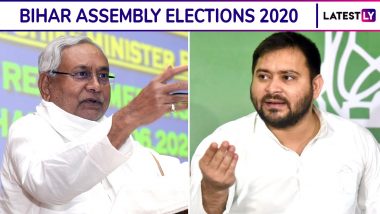 Patna, October 25: The National Democratic Alliance (NDA), headed by the Bharatiya Janata Party (BJP) and Janata Dal (United), is likely to retain power in the upcoming Bihar assembly elections, according to an opinion poll conducted by Times Now-C Voter. The BJP will emerge as the single largest party, as per the Times Now-C Voter survey. The Mahagathbandhan or grand alliance of the Rashtriya Janata Dal (RJD), Congress and Left parties will be far away from the majority mark, the opinion poll predicted. Bihar Assembly Elections 2020: 5 Key Takeaways From IANS-C Voter Opinion Poll Results.

The NDA is likely to win the Bihar assembly elections bagging 147 seats in the 243-member House, said the survey. Within the NDA camp, the BJP is predicted to emerge with the lion's share, with victory in 77 constituencies. The JD(U) is predicted to win 63 seats. The other allies such as Vikashsheel Insaf Party (VIP) and Hindustan Awami Morcha (Secular) may bag 7 seats together. Bihar Assembly Elections 2020 Dates And Schedule: Voting in 3 Phases on October 28, November 3 and 7, Poll Results on Nov 10.

In the Bihar assembly elections, the BJP is contesting 121 seats, while its ally JD(U) has been given 122 seats. As per the seat-sharing agreement of Mahagathbandhan, the RJD is contesting 121 seats, Congress 70 and Left parties have been allotted 29 seats. Bihar will go to polls in three phases: October 28, November 3 and November 7 for its 243 assembly seats. The results will be declared on November 10.

(The above story first appeared on LatestLY on Oct 25, 2020 11:14 PM IST. For more news and updates on politics, world, sports, entertainment and lifestyle, log on to our website latestly.com).