The Election Commission of India (ECI) on Tuesday announced dates for by-elections to 56 assembly constituencies across 11 states and one Lok Sabha seat. 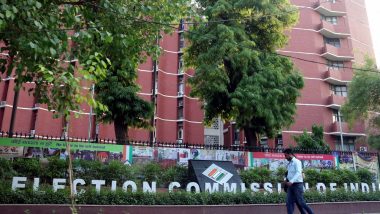 New Delhi, September 29: The Election Commission of India (ECI) on Tuesday announced dates for bye-elections to 56 assembly constituencies across 11 states and one Lok Sabha seat. According to the schedule announced by the ECI, 54 assembly seats will go to by-polls on November 3, while bye-elections on two assembly seats and Valmiki Nagar Lok Sabha seat will be held on November 7.  The results will be declared on November 10. Bihar Assembly Elections 2020 Dates And Schedule: Voting in 3 Phases on October 28, November 3 and 7, Poll Results on Nov 10.

Among 56 assembly seats going to bye-elections are 28 seats in Madhya Pradesh, 8 in Gujarat, 7 in Uttar Pradesh, 2 each in Karnataka, Jharkhand Manipur, Nagaland, Odisha and 1 each in Chhattisgarh, Haryana and Telangana. Two seats in Manipur will go to bypolls on November 7, bye-elections on 54 other seats will be held on November 3. The counting of votes will take place on November 10 and the entire procedure shall be completed before November 12. EC Guidelines: Postal Ballot Facility For Select Categories of Voters Including Senior Citizens, Campaigning And Rallies Allowed in Adherence to COVID-19 Restrictions.

The poll panel also said that it has decided not to hold by-elections to vacant seats in West Bengal, Kerala, Tamil Nadu and Assam for now. "The Commission has decided not to announce bye-elections at this stage in Assam, Kerala, Tamil Nadu and West Bengal. The Commission received inputs expressing difficulties in conduct of elections and issues related to it from Chief Secretaries/Chief Electoral Officers from these states," read a statement from the poll panel. The ECI did not go into specifics.

(The above story first appeared on LatestLY on Sep 29, 2020 02:12 PM IST. For more news and updates on politics, world, sports, entertainment and lifestyle, log on to our website latestly.com).