While Agartala saw 54.20 per cent of the voters exercising their franchise till 1 pm, Surma and Jubarjnagar in Tripura recorded 53.50 per cent and 46.56 per cent respectively. Town Bardowali saw 52.16 per cent voter turnout, according to the EC. 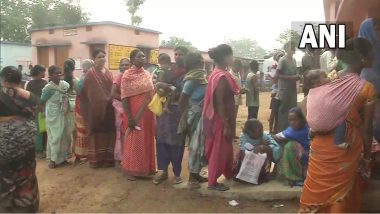 New Delhi, June 23: Moderate to brisk turnout was recorded till 1 pm in the bypolls for three Lok Sabha and seven assembly seats spread across five states and one Union territory on Thursday amid an incident of violence in Tripura where a policeman was stabbed. Counting of votes for the bypolls in Delhi, Uttar Pradesh, Punjab, Tripura, Andhra Pradesh and Jharkhand will be taken up on Sunday.

While Punjab recorded over 22 per cent polling till 1 pm in the Sangrur Lok Sabha seat, around 28 per cent voters in Azamgarh and Rampur Lok Sabha seats in Uttar Pradesh exercised their franchise in the first six hours of voting.

An impressive voter turnout was recorded in Tripura till 1 pm which is witnessing bypolls to four assembly seats of Agartala, Town Bardowali, Surma and Jubarajnagar seats.

While Agartala saw 54.20 per cent of the voters exercising their franchise till 1 pm, Surma and Jubarjnagar in Tripura recorded 53.50 per cent and 46.56 per cent respectively. Town Bardowali saw 52.16 per cent voter turnout, according to the EC.

Over 26 per cent polling was recorded since voting began for the bypoll to the Rajinder Nagar assembly constituency in the national capital. In Andhra Pradesh, over 44 per cent of the voters exercised their right in Atmakur till 1 pm while 44.81 per cent voters exercised their franchise in the by-election to Mandar assembly seat in Jharkhand's Ranchi district. Uttar Pradesh Lok Sabha By-Elections 2022.

Amid the voting process, the opposition Samajwadi Party in Uttar Pradesh wrote to the Election Commission alleging voter intimidation and harassment.

In a series of tweets, the Samajwadi Party alleged wrongdoings in different areas where bypolls are underway.

"The police are harassing SP workers at the behest of the ruling party in Tanda and Daryal areas of Swar assembly seat in Rampur Lok Sabha by election. The Election Commission should take note. Action should be taken against the guilty policemen.Ensure fair voting," the Samajwadi Party said, attaching a letter written to the EC in this regard.

"All agents have been made to leave from all the polling booths in Gopalpur, Sagdi, Mubarakpur, Azamgarh and Mehnagar assembly areas as part of a conspiracy at the behest of the BJP. The Election Commission should take note. Ensure fair elections," the SP charged in another tweet. There was also a report of a police inspector allegedly misbehaving with an elderly voter in Bilaspur in Rampur leading to ruckus.

State minister Baldev Singh Aulakh, however, reached the spot and pacified the people, the report said. The bypolls to the Azamgarh seat were necessitated by the resignation of SP chief Akhilesh Yadav, who was elected to the Uttar Pradesh Legislative Assembly as an MLA in the elections earlier this year.

The Rampur seat was vacated by senior SP leader Azam Khan, who too was elected to the state Assembly. In Punjab, prominent among those who cast their vote for the Sangrur seat included Finance Minister Harpal Cheema and contesting candidates AAP's Gurmail Singh, Congress' Dalvir Singh Goldy and BJP candidate Kewal Singh Dhillon.

In Tripura, Chief Minister Manik Saha is among the prominent candidates contesting the bypolls.

Tripura witnessed an incident of violence with an off-duty police constable, Samir Saha being stabbed in the stomach while he was going with his family to exercise his franchise in Kunjaban area in Agartala constituency, a police officer said, adding the assailants attempted to prevent Saha and his family members from casting their vote.

Saha, who is attached to Gandacherra Police Station in Dhalai district, has been admitted to a hospital and his condition is stated to be stable, he said. On Wednesday night, unidentified people attacked the residence of TMC candidate for Surma seat, Arjun Namasudra, in Bamancherra in Dhalai district.

"The candidate is unhurt but his vehicle was vandalised," Dhalai SP Ramesh Yadav told PTI. TMC state president Subal Bhowmik alleged that BJP-backed goons had attacked Namasudra's house and also tried to beat up a polling agent. However, Saha rubbished the allegations as baseless.

"They have been making one accusation after another. Democracy has been strengthened in Tripura with the administration and ECI discharging their duties properly," he said. "I am 100 per cent sure that BJP will win all the four seats based on the good work done by Prime Minister Narendra Modi and my predecessor Biplab Kumar Deb for the welfare of the people," he told reporters after casting his vote.

The bypolls in Agartala and Town Bardowali were necessitated after Sudip Roy Barman and Asish Saha quit as BJP MLAs and joined the Congress in February.

In Andhra Pradesh, the bypoll is being held to fill the vacancy caused due to the death of then Industries Minister Mekapati Goutham Reddy in February. His brother Vikram Reddy is the ruling YSR Congress candidate and he is locked in a contest with BJP's G Bharat Kumar Yadav.

Voting was underway on a moderate pace in Delhi's Rajinder Nagar seat.

The two major contenders -- the AAP and the BJP -- have exuded confidence that their candidates will emerge victorious. The bypolls was necessitated in the wake of AAP leader Raghav Chadha leaving the seat after being elected to the Rajya Sabha recently.

Chadha was the MLA from the Rajinder Nagar Assembly seat. In Jharkhand, bypoll to Mandar assembly seat is underway amid tight security. Voting is taking place in 433 polling stations, with 141 booths having been declared hyper-sensitive, 218 as sensitive, and 55 as vulnerable.

The by-election was necessitated after the disqualification of Bandhu Tirkey as an MLA in the wake of his conviction in a corruption case. The Congress has fielded Bandhu's daughter, Shilpa Neha Tirkey, as the common candidate of the JMM-led alliance, while BJP has nominated former legislator Gangotri Kujur.