With various PCC chief writing to Sonia Gandhi and requesting her to give the responsibility of Congress President to Rahul Gandhi, senior Congress leaders Ashok Gehlot and Leader of Congress party in Lok Sabha -- Adhir Ranjan Chowdhury -- appealed Sonia Gandhi to continue as Congress chief. 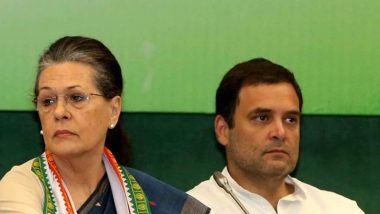 Expressing his opinion, Rajasthan CM Ashok Gehlot said, "News of 23 senior most Congress leaders writing letters to Congress President is unbelievable & if it's true - it’s very unfortunate. There was no need to go in media, I strongly believe that Sonia Gandhi ji should continue to lead the party at this crucial juncture." Adding more, he said, "Where the fight is to save ethos of democracy, she has always taken challenges head-on. But if she has made up her mind-I believe Rahul Gandhi should come ahead & be the Congress President." Sonia Gandhi to Step Down as Congress President, Final Decision at CWC Meeting Tomorrow: Reports.

Echoing similar opinion, Karnataka PCC chief DK Shivakumar came in support of Sonia Gandhi and appealed her to continue as Congress president. He said, "Entire Congress in Karnataka stands by the leadership of Sonia Gandhi & the Gandhi family. She has led Congress during times of crisis & saved our party. Anything that has to be discussed must be done so in the party forum & not in the media."

Apart from Gehlot and Shivakumar, Adhir Ranjan Chowdhury and Congress MP B Manickam Tagore too requested Sonia Gandhi to continue. Meanwhile, 23 senior-most Congress leaders wrote to Sonia Gandhi and requested her o give the responsibility of Congress President to Rahul Gandhi so that he can lead the party and fight BJP and RSS from the front.

(The above story first appeared on LatestLY on Aug 23, 2020 07:59 PM IST. For more news and updates on politics, world, sports, entertainment and lifestyle, log on to our website latestly.com).