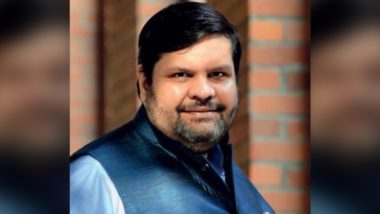 New Delhi, June 15: The Congress has questioned the silence of NSDL, SEBI and the Finance Ministry in the alleged investments in the Adani-owned companies.

Addressing a press conference on Tuesday Congress spokesperson Gaurav Vallabh said: "What are the findings of the NSDL and SEBI in the investment and if there is something dubious the case should be handed over to Enforcement Directorate."  Galwan Valley Clash: 'Patiently Waited for a Year on Galwan but No Clarity', Says Congress Interim President Sonia Gandhi

He said as per the news report, National Securities Depository Ltd (NSDL), which is an Indian central securities depository under the jurisdiction of Ministry of Finance, Government of India, has frozen the accounts of three foreign funds: Albula Investment Fund, Cresta Fund and APMS Investment Fund.

These three funds together own over Rs 43,500 crore worth of shares in four Adani Group companies.

Vallabh alleged that the aforementioned funds are all registered at the same address in Port Louis, Mauritius, and do not have websites.

The aforementioned funds derive more than 95% of their net worth from their investments in the Adani Group companies.

"It is important to understand the ultimate beneficial ownership of these funds as these funds have the same address and don't even have websites that raises suspicion further," he added.

The Congress party demanded that the SEBI and NSDL come out with a complete disclosure about the nature of these funds, ultimate beneficial ownership of these funds, the findings of their enquiry (if any), what securities these funds hold and why were their accounts frozen?

"Based on the findings of the news report, we also demand that if SEBI's ongoing investigation has revealed any irregularities with regards to price manipulation of Adani group stocks, Government of India should transfer the investigation to Enforcement Directorate to investigate the entire matter and come out with the truth for everyone to understand."

In the middle of all the confusion, Adani Enterprises Limited came out with a statement on Monday, saying that the Demat account in which the aforesaid funds hold the shares of the company are not frozen.

Certain other reports suggest that the accounts frozen by NSDL were depository accounts.

(The above story first appeared on LatestLY on Jun 15, 2021 04:37 PM IST. For more news and updates on politics, world, sports, entertainment and lifestyle, log on to our website latestly.com).