'Ek Bharat Ek Atma' Day to be Observed in Jammu & Kashmir, Ladakh on August 5 to Mark One Year of Article 370 Repeal: BJP 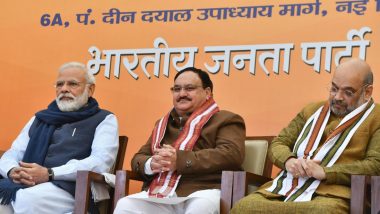 Srinagar, July 30: The Bharatiya Janata Party (BJP) will observe the 'Ek Bharat Ek Atma (One Nation One Soul) Day' in Jammu & Kashmir and Ladakh on August 5. The event will mark the first anniversary of Article 370 repeal. On this date, one year ago, the Union Parliament had abrogated the law which granted semi-autonomous status to the region.

A 15-day campaign, beginning from August 5, will be observed by the J&K and Ladakh unit of the BJP to highlight the importance of abrogating the law. The central BJP under the leadership of party president JP Nadda would also be conducting a campaign to inform citizens across the nation why ending J&K's special status was necessitated. One Year of Axing Article 370: Pakistan Prime Minister Imran Khan, ISI Propagating Itself As ‘Messiah’ of Kashmiris.

On August 5, the BJP has planned to hoist national flag in all panchayat zones of J&K and Ladakh to mark national integration. Between 9 am to 11 am, national anthem would be sung in all the district-level civic bodies. In the evening, most households would light earthen lamps to celebrate the occasion.

The move to repeal Article 370, said J&K BJP unit chief Ravinder Raina, has ushered into an era of development for the frontier region. The politics of separatism is over and terrorism would also be completely wiped out in the days to come, he said.

Apart from abrogating the law that guaranteed special status to J&K, the Union government had last year also bifurcated the erstwhile state into two union territories of Jammu & Kashmir and Ladakh. This was expected to be followed by a delimitation exercise to conduct fresh elections. The outbreak of coronavirus, however, has deferred the plans to conduct the polls.

(The above story first appeared on LatestLY on Jul 30, 2020 03:34 PM IST. For more news and updates on politics, world, sports, entertainment and lifestyle, log on to our website latestly.com).