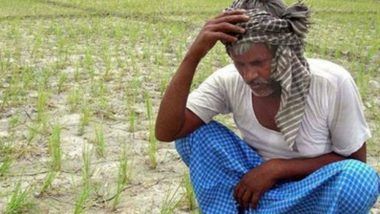 New Delhi, July 10: The incidents of suicide by farmers increased after Congress-led UPA announced a loan waiver of Rs 70,000 crore in 2008, said the Modi government in Parliament. Responding to a query by BJP member Radha Mohan Singh during Question Hour in the Lok Sabha, Union Minister of State for Agriculture Parshottam Rupala on Tuesday said the 2008 farm loan waiver failed to control farmers suicide in the country. Maharashtra: Upset Over No Electricity Connection for 38 Years, Farmer in Buldhana Tries to Commit Suicide Before State Energy Minister.

Rupala also said that the loan waiver announced for farmers were given to people who were not farmers. This was found out in an audit conducted after the announcement of the loan waiver scheme. Following the response, Congress MP Gaurav Gogoi alleged that the government was hiding data and sought full details on farmers suicide. The minister, however, denied the allegation and said the government's reply contained the data. Vijay Rupani Blames Congress For Farmers Suicides in Saurashtra Region, Says ‘Opposition Parched People to Death’.

Asked whether the Supreme Court had suggested that the government bring out a national policy to control farmers suicides, Agriculture Minister Narendra Singh Tomar said the Attorney General was right in asking for more time as the apex court in its order on July 6, 2017, stated an issue like this could not be dealt with overnight, The Indian Express reported.

(The above story first appeared on LatestLY on Jul 10, 2019 09:08 AM IST. For more news and updates on politics, world, sports, entertainment and lifestyle, log on to our website latestly.com).