From Gujarat minister Parshottam Solanki, seven-term MLA Kunwarji Bavaliya to Morbi "hero" Kantilal Amrutiya, and cricketer Ravindra Jadeja's wife Rivaba, let's take a look at some of the key candidates for Gujarat polls whose fate will be decided during the first round of state assembly elections. 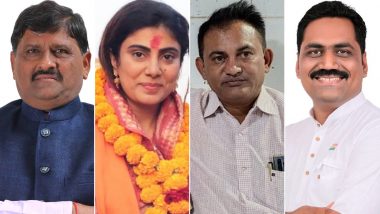 Mumbai, November 22: The Gujarat Assembly Elections 2022, which is all set to go for polling in December will witness a tough battle between the ruling BJP party and the Congress party as the new entrant Aam Aadmi Party (AAP) party tries to make inroads in the state. The coastal state will go to polls in two phases with the first phase to be held on December 1 and the second one on December 5.

Meanwhile, there are quite a few names which are contesting the polls thereby promising a healthy competition on certain constituencies. From Gujarat minister Parshottam Solanki, seven-term MLA Kunwarji Bavaliya to Morbi "hero" Kantilal Amrutiya, and cricketer Ravindra Jadeja's wife Rivaba, let's take a look at some of the key candidates for Gujarat polls whose fate will be decided during the first round of state assembly elections. Gujarat Assembly Elections 2022: Full List of Congress Candidates and Their Constituency Name.

Kantilal Amrutiya, the BJP leader came to prominence once again after the Morbi bridge collapsed in Gujarat. Amrutiya, the five-time former BJP MLA came into limelight after videos of him jumping into the water to save people during the Morni tragedy went viral on social media. Besides being a popular face, Amrutiya's courageous act helped him to bag a ticket for the Morbi Assembly seat. Interestingly, he has won the seat on five occasions in 1995, 1998, 2002, 2007 and 2012, however, lost the election in 2017 to Congress candidate Brijesh Merja.

The name shouldn't surprise many but it did. In what can be seen as a strategic move, the ruling BJP party gave ticket to Rivaba Jadeja, wife of Indian cricketer Ravindra Jadeja's, Rivaba's elevation stunned many after the BJP dropped sitting MLA Dharmendrasinh Jadeja from the seat. Although Rivaba has no prior experience of politics or contesting an election, she is touted to win the Jamnagar North seat.

The Congress party has fielded Paresh Dhanani from the Amreli seat for the Gujarat Assembly Elections 2022. Dhanani, who earned the nickname 'giant killer' when he defeated BJP party's veteran leader Parshottam Rupala at a young age during the 2002 assembly elections. After governing for five years, Dhanani lost the Amreli seat in 2007 only to make a strong comeback on the Patidar-dominated seat in the 2012 and 2017 assembly elections. Who Is Isudan Gadhvi? Here's Everything You Need To Know About AAP’s CM Candidate for Gujarat Assembly Elections 2022.

The Aam Aadmi Party, which is trying to make inroads into Gujarat, will hope that Gopal Italia wins the Katargam seat during the state assembly elections. Interestingly, the young leader was recently elevated as the president of Gujarat AAP. Italia will be contesting the upcoming assembly elections from the Katargam in Surat, which is Patidar-dominated constituency. At present, the BJP has a strong hold over this seat with even the grand old party failing to make impact during the 2017 assembly elections when the Patidar quota agitation was taking place.

Thummar, a Congress leader and sitting MLA of Lathi (Amreli district) will also be contesting the assembly elections this year. In the past, Thummar was elected to the Lok Sabha from Amreli on the grand old party's ticket.

Another BJP leader, Kunwarji Bavaliya who is a former Congress leader will be contesting the elections from Jasdan seat. A seven-time MLA, Bavaliya will face competition from Congress leader Bholabhai Gohel. A prominent leader of the Koli community, Bavaliya has also served as a minister in the Vijay Rupani government. Gujarat Assembly Elections 2022: 50-Odd Unrecognised Parties To Contest Polls.

The Aam Aadmi Party (AAP) declared Gadhvi as its chief ministerial candidate for the Gujarat Assembly Elections 2022. The 40-year-old leader joined AAP in June last year and since then has grown from strength to strength. He will be contesting from Khambhalia seat in Dwarka. Gadhvi was chosen as the party's CM face by the people of Gujarat.

(The above story first appeared on LatestLY on Nov 22, 2022 09:10 PM IST. For more news and updates on politics, world, sports, entertainment and lifestyle, log on to our website latestly.com).