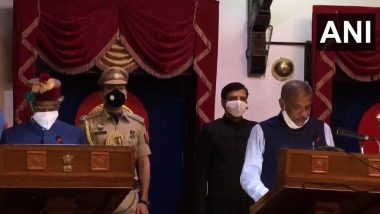 Shimla, July 30: BJP MLAs Sukhram Chaudhary, Rakesh Pathania and Rajender Garg take oath as Himachal Pradesh Cabinet Ministers on Thursday. The three ministers were inducted into the Jai Ram Thakur Cabinet at a simple ceremony restricted only for 50 persons at the Raj Bhawan, with live telecast made to all across the state.

The talk about the impending Cabinet expansion gained strength on Wednesday as Chief Minister Jai Ram Thakur called on Governor Bandaru Dattatraya, informing him about his plan to fill up the three vacancies in his Cabinet. Then in the evening, an invite was officially sent to everyone for the oath ceremony at Raj Bhawan at 11.15 am. Himachal Pradesh CM Jai Ram Thakur in Self-Quarantine After Deputy Secretary in His Office Tests COVID-19 Positive.

The expansion of the state cabinet got delayed due to the outbreak of the coronavirus.

(The above story first appeared on LatestLY on Jul 30, 2020 12:02 PM IST. For more news and updates on politics, world, sports, entertainment and lifestyle, log on to our website latestly.com).