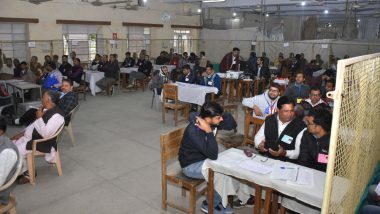 Bengaluru, December 9: The counting of votes for Hunsur Assembly seat in Karnataka began on Monday morning amid high security. The election results have been declared, Congress party's HP Manjunath won from the constituency after defeating BJP's Adaguru H Vishwanath.

Hunsur is among the 15 seats that went to by-polls on December 5, 2019, and the results will decide the fate of the state whether ruling Chief Minister B S Yediyurappa-led Bharatiya Janata Party would retain power or lose to Congress-JD(S) coalition.

Among the key candidates for the Hunsur Assembly seat in Karnataka include BJP's Adaguru H Vishwanath, Congress's HP Manjunath, and JDS's Somashekar. The seat is currently represented by Adagur H Vishwanath, who has switched his boat from JDS to BJP. Karnataka Bypolls 2019 Exit Polls Results: BJP to Maintain Majority Status in Assembly With Victory in 8-12 Seats, Predicts Surveys.

(The above story first appeared on LatestLY on Dec 09, 2019 12:04 PM IST. For more news and updates on politics, world, sports, entertainment and lifestyle, log on to our website latestly.com).