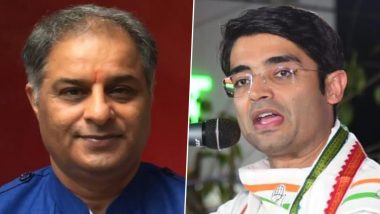 New Delhi, August 13: Congress' national spokesperson Jaiveer Shergill wrote a letter to Information & Broadcasting Minister Prakash Javadekar on Thursday, a day after the death of his colleague and party leader Rajiv Tyagi. Shergill in his letter, appealed to Javadekar to issue a fresh media advisory with the intent to restore civility on television news channels.

Tyagi, 50, died on Wednesday evening after suffering from a heart attack. Barely an hour before the cardiac arrest, Tyagi was part of a debate at a news channel over the violence in Bengaluru. Twitterati in Disbelief With Rajiv Tyagi’s Untimely Demise As He Participated in a Television Debate at 5 PM.

Netizens and a section of Congress leaders were quick to point out that the heated barbs exchanged between him at the spokesperson of rival political party could had increased his stress level.

My letter to I&B Minister Sh @PrakashJavdekar Ji requesting him to issue an advisory to Media to enforce a Code of Conduct to curb Slanderous,Sensationalist & Toxic TV Debates-High time to reinforce civility & mutual respect for sake of well being of participants & democracy pic.twitter.com/z3ooQjbX5f

In his letter to Javadekar, Shergill asked the I&B Minister to take immediate measures at curbing the "slanderous, defamatory, exaggerated and vicious high-volume atmosphere" on television news debates. The sole aim of these shows, alleged Shergill, is to create entertainment.

The sudden demise of Tyagi "is a crude reminder of the toll which media debates take on the bodily and mentally well-being of an individual representing his/her organisation", the Congress spokesperson stated in his letter.

Javadekar, who was himself the prime spokesperson of the Bharatiya Janata Party (BJP) for several years, was asked by Shergill through his letter to issue an advisory to media channels under the Cable Television Regulations Act 1995. The advisory should be aimed at mandating adherence to the Code of Conduct for news channels as finalised by the News Broadcasting Authority of India (NBAI).

(The above story first appeared on LatestLY on Aug 13, 2020 06:29 PM IST. For more news and updates on politics, world, sports, entertainment and lifestyle, log on to our website latestly.com).