With less than 10 days left for the Lok Sabha election result, the BJP is now projected to win 220 seats. 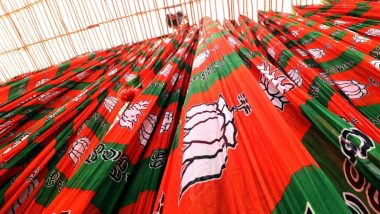 Bhopal, May 15: Till the culmination of the fifth phase of polling for the Lok Sabha elections 2019, Indore's famous satta bazar (betting market) had odds in favour of Bharatiya Janata Party (BJP) to cross a total of 240 seats on its own. After the sixth phase of polling, there has been a drop in support for BJP, according to Matka players and bookies. With less than 10 days left for the Lok Sabha election result, the BJP is now projected to win 220 seats.

Till about ten days ago, Indore's satta bazar was abuzz with speculation that the BJP may win a total of 240 seats on its own and get a comfortable majority along with other partners of the National Democratic Alliance (NDA). The last two phases BJP's tally is being quoted at 220 in the satta market, reported news agency IANS. Bookies and Matka players are still of the view that the Congress would not cross the 100-mark.

Earlier, Rajasthan's famous Phalodi satta bazaar predicted 240-245 seats for the BJP with the NDA touching 320-325. The betting market in Gujarat's Surat forecast 246-248 seats in favour of BJP. Bookies say the Congress would be at a distant second with 78-80 seats. We at LatestLY doesn't support betting and these numbers are based on speculations in the betting market.

The 120-year-old satta market in Indore had predicted a Congress victory in the December assembly elections in Madhya Pradesh which came true though the numbers fell short. Initially, Congress was projected to bag 122 seats and BJP 90. After the nominations were filed, the BJP inched ahead past 100 to settle at 102 while the Congress slipped to 114. It stayed there on the figure in the market and in reality.

However, there have been elections predictions of which were wrongly made by punters. The betting market made the wrong forecast of Delhi and Bihar Assembly elections in 2015. The worst debacle was the Uttar Pradesh Assembly polls of 2017. The satta bazar called the BJP figure at 203 seats, which actually overshot to 325.

(The above story first appeared on LatestLY on May 15, 2019 10:36 AM IST. For more news and updates on politics, world, sports, entertainment and lifestyle, log on to our website latestly.com).