LPG Price Hike: Rahul Gandhi Takes Swipe at Smriti Irani, Reminds BJP of Its Own Protest With a Throwback Picture 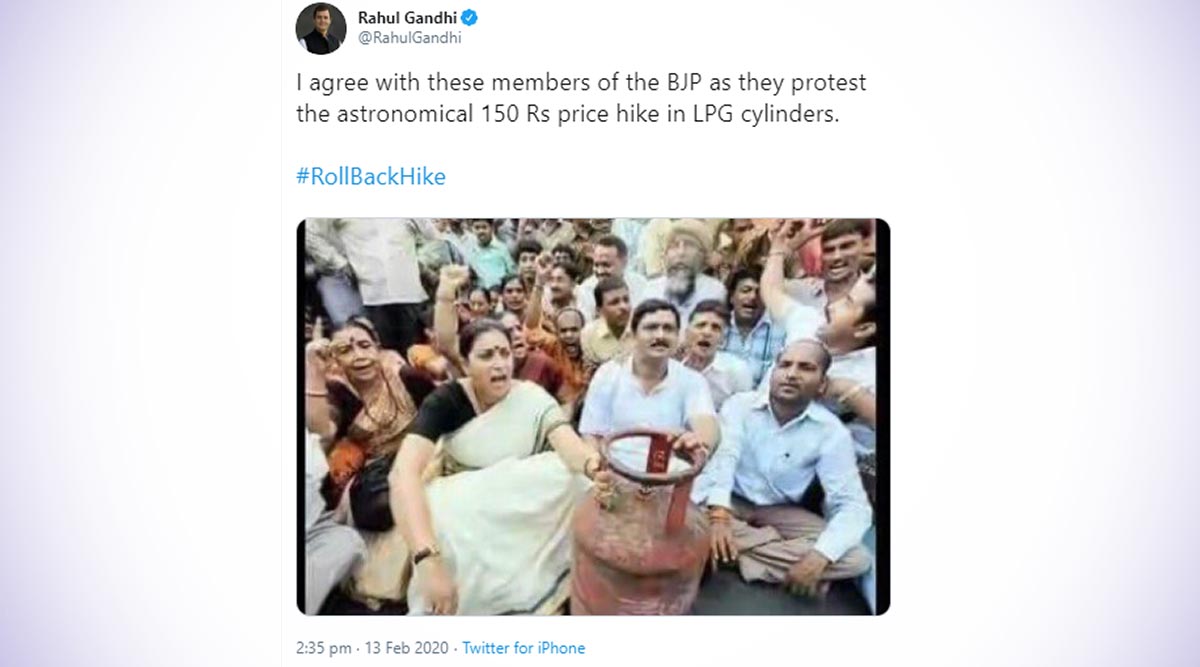 New Delhi, February 13: Congress lawmaker Rahul Gandhi on Thursday tweeted an old picture of Union Minister Smriti Irani, taking a dig at the Bharatiya Janata Party (BJP) over the LPG cylinders' price hike. "I agree with these members of the BJP as they protest the astronomical Rs 150 price hike in LPG cylinders," Rahul Gandhi tweeted with the hashtag #RollBackHike. Indane Gas Rate Hiked From Today in Metros: 14-Kg Non-Subsidised Cylinder to Cost Rs 858.50 in Delhi & Rs 881 in Chennai, Check Rates in Other Cities.

Gandhi also attached an old picture of Smriti Irani protesting along with the BJP workers with an LPG cylinder over the price hike. The Congress leader's remark came a day after prices of cooking gas were hiked by Rs 144.50 per cylinder. This was one of the steepest increases in the LPG prices in over five years. A non-subsidised 14.2 kg cylinder will now cost Rs 858.50 in Delhi, Rs 896 in Kolkata, Rs 829.50 in Mumbai and Rs 881 in Chennai.

I agree with these members of the BJP as they protest the astronomical 150 Rs price hike in LPG cylinders. #RollBackHike pic.twitter.com/YiwpjPdTNX

Rahul Gandhi's dig at Irani makes it evident that the sharp political rivalry between the two leaders is still alive and he has not forgotten the loss of his family bastion Amethi to the BJP leader. Irani had defeated the former Congress president from Uttar Pradesh's Amethi by a margin of 55,000 votes in the 2019 Lok Sabha elections. Gandhi entered Parliament thanks to his victory in Kerala's Wayanad. Smriti Irani Creates History By Winning Congress Bastion Amethi Lok Sabha Seat; Here's A Look At How The BJP Leader Defeated Rahul Gandhi.

The price of subsidised LPG cylinder (14.2 kg) currently works to around Rs 557 with the government providing Rs 157 as subsidy directly into the account of eligible consumers. With the revised prices, the government's subsidy under direct benefit transfer (DBT) to eligible consumers would increase to over Rs 300 per cylinder with the PMUY customers getting about Rs 312 into their accounts now.