Manipur Assembly Elections 2022: A Look Back at The Polling, Alliances And Results of 2017 Election Ahead of State Vidhan Sabha Polls

In the most highlighted contest, the then CM of Manipur and 3 times winner, Okram Ibobi Singh of Congress comfortably defeated Leitanthem Basanta Singh of BJP and Irom Sharmila, with the latter receiving only 90 votes. In Nambol, Congress candidate defeated T H Chaoba, the former BJP state president. 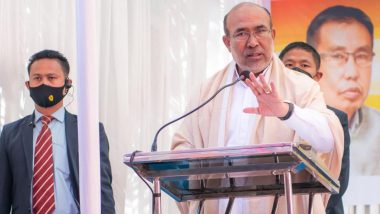 Manipur, January 26: The voting for the Manipur Assembly Elections 2022 will be held on 60 constituencies in two phases. Phase 1 is scheduled for February 27 while phase 2 is on March 3. The counting of votes will take place on March 10, and on the same day, the Manipur Assembly Elections 2022 results will be declared. With weeks left before the state goes to the polls, let us take a look at the 2017 Manipur assembly elections.

Manipur elections 2017 were one of the most interesting ones. The Congress and the BJP had a close neck-to-neck fight as the elections went down to the wire. The Congress managed to win 28 seats while BJP won 21 seats in Manipur Assembly Elections 2017. The Naga Peoples Front (NPF) and the National People's Party (NPP) bagged four seats each. The Lokjanshakti Party and the Trinamool Congress won one seat along with an independent candidate. Assembly Elections 2022 Dates And Full Schedule Announced by EC: Voting to Take Place Between Feb 10 And March 7 in UP, Punjab, Uttarakhand, Manipur, Goa; Results on March 10.

Even though Congress emerged as the single largest party, the 15-year-old regime of Congress was thrown away by BJP. Bhartiya Janta Party, after winning 21 seats, formed the state government after reaching the magic number of 33 with the support of 4 MLAs of NPP and NPF each, 1 MLA of LJP, Congress, Trinamool Congress who joined the saffron party, and 1 independent candidate. Congress only managed to acquire the number of 27 in the floor test. N. Biren Singh was sworn in as Chief Minister of Manipur on 15 March 2017, thus becoming the first-ever BJP CM in Manipur. Goa Assembly Elections 2022: A Look Back at The Polling, Alliances And Results of 2017 Election Ahead of Vidhan Sabha Polls.

(The above story first appeared on LatestLY on Jan 26, 2022 06:51 PM IST. For more news and updates on politics, world, sports, entertainment and lifestyle, log on to our website latestly.com).