The counting of votes for the results of by-elections for five seats of the Municipal Corporation of Delhi or MCD was held on Wednesday. 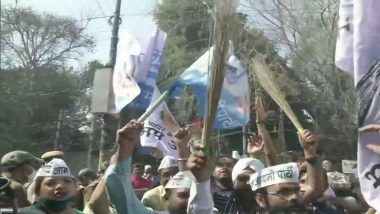 New Delhi, March 3: The counting of votes for the results of bye-elections for five seats of the Municipal Corporation of Delhi or MCD was held on Wednesday. The Aam Aadmi Party (AAP) won four out of five wards where bypolls were held. The Congress managed to win one ward. Workers of the AAP and the Congress celebrated after their parties' victory. Gujarat Local Body Poll Results: BJP Wins Big, Congress Routed, AAP Impresses Again.

The BJP, however, presently controls all three municipal bodies in Delhi. AAP leader and Delhi's Deputy Chief Minister Manish Sisodia congratulated his party for winning four out of five seats. He tweeted: "Congratulations to the Aam Aadmi Party workers on winning 4 out of 5 seats in the MCD by-election. People of Delhi are fed up of the BJP's rule. In next year's MCD election people will vote for @ArvindKejriwal's honest politics."

The bypolls in Kalyanpuri, Rohini, Trilokpuri and Chauhan Bangar wards were necessitated after the sitting councillors were elected as MLAs. The Shalimar Bagh seat was vacant since death of BJP councilor Renu Jaju in 2019.

(The above story first appeared on LatestLY on Mar 03, 2021 11:27 AM IST. For more news and updates on politics, world, sports, entertainment and lifestyle, log on to our website latestly.com).