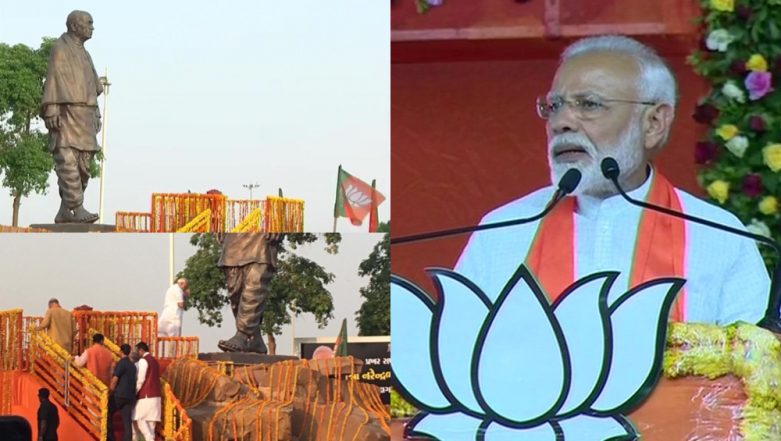 Ahmedabad, May 26: Bharatiya Janata Party stalwart and Prime Minister-designate Narendra Modi on Sunday reached Ahmedabad to seek blessing from his mother Heeraben. But before meeting his mother, he paid tribute to Sardar Vallabhbhai Patel's statue near the Ahmedabad Airport. He also addressed a mass gathering in Ahmedabad, where expressed his solidarity with bereaved families of Surat fire tragedy.

Addressing the people, he said, while expressing his grief on the Surat fire tragedy, "The fire tragedy in Surat has saddened us all. We stand in solidarity with the bereaved families. May Almighty give them strength in this hour of grief." After this reiterated that Gujarat holds a special place for him and he always values the blessings of the people of the state. Narendra Modi to Take Oath as PM on May 30 at 7pm in Rashtrapati Bhavan With Members of Union Council of Ministers

On the way to the thank the voters for giving a majority to BJP in the recently concluded Lok Sabha Elections 2019, he paid tribute to Sardar Vallabhbhai Patel's statue near the Ahmedabad Airport.

It is to be known that the BJp secured a thumping victory in the Lok Sabha Elections by securing a majority on its own, crossing the 300-mark. Along with the National Democratic Alliance, BJP now has the support of 353 parliamentarians, while Opposition could only manage 91 seats.