NDA Dinner Menu: Puran Poli, Gujarati Special Thali and More; Here’s What Will Be Served at the Meet Hosted by Amit Shah

The menu will have about 35 different dishes ranging from Maharashtra’s famous Poranpoli to special delicacies of the North-East. Besides all this, famous dishes of Delhi along with Gujarat’s special thali will also be served during the high-profile dinner. 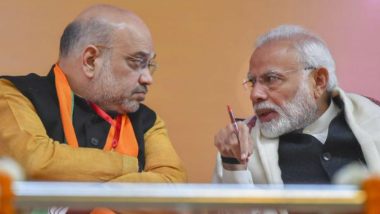 New Delhi, May 21: Two days ahead of counting of votes for Lok Sabha Elections 2019, Prime Minister Narendra Modi and Bharatiya Janata Party (BJP) President Amit Shah will hold a dinner meeting on Tuesday for  National Democratic Alliance (NDA) leader and its allies. According to reports, the meeting is likely to chalk out a strategy for the post poll scenario. Apart from PM Modi and Shah, the other top leaders that will be present include  Bihar CM Nitish Kumar, Shiv Sena chief Uddhav Thackeray and Lok Janshakti Party head Ram Vilas Paswan.

The high-profile dinner meeting is believed to comprise of around 35 different dishes ranging from Maharashtra’s famous Puran Poli to special delicacies of the North-East. Besides all this, famous dishes of Delhi along with Gujarat’s special thali will also be served on Tuesday. BJP Majority 2019 Elections Exit Poll Predictions: Find Out What Celebs Have to Say.

A meeting of key BJP leaders, including Union ministers and Modi, is also scheduled to be held in the party headquarters before the dinner meeting with allies. According to a report by PTI, BJP's decision to host the dinner comes following the exit poll predictions that projected another term for Modi.

Polling for 542 seats,which started on April 11,  concluded on Sunday and counting of votes is slated for May 23. The exit poll predictions on Sunday forecasted that the BJP-led NDA will cross the majority mark of 272 in the 543-member Lok Sabha. The exit polls have been held for 542 seats as the Election Commission had deferred the election for Vellore seat due to allegations of the use of money to influence the voting.

(The above story first appeared on LatestLY on May 21, 2019 03:33 PM IST. For more news and updates on politics, world, sports, entertainment and lifestyle, log on to our website latestly.com).