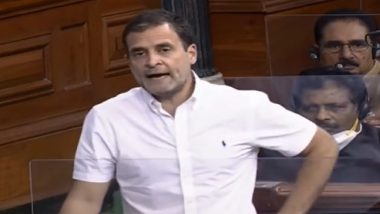 During oral evidence by the Ministry of Defence on the budgetary allocation and the expenditure of the ministry, Gandhi asked General Rawat why 36 Rafale jets were purchased instead of 126 that was proposed initially, according to a report by The Indian Express. He also asked whether this will affect the Indian Air Force’s plans to expand its air combat capability. Year Ender 2020: From Arrival of Rafale Jets to MH-60 Romeo Helicopters Deal With US, Major Developments For Indian Defence Sector This Year.

The report said while General Rawat replied that the IAF is procuring indigenous fighter jets from Hindustan Aeronautics Ltd, panel's chairman Jual Oram asked Rahul not to raise issues which are not part of the agenda. The meeting's agenda was to examine Demands for Grants of the Ministry of Defence for 2021-22.

The report also mentioned that Bahujan Samaj Party's MP Kunwar Danish Ali backed Gandhi and said that members should be allowed to ask questions. Danish Ali also sought to know if the Air Force is banking on HAL for procurement of fighter jets, then why the public sector undertaking was overlooked in the Rafale deal.

(The above story first appeared on LatestLY on Feb 19, 2021 11:38 AM IST. For more news and updates on politics, world, sports, entertainment and lifestyle, log on to our website latestly.com).