Sachin Pilot, Sacked as Rajasthan Deputy CM Amid Political Row in Rajasthan, Thanks Those Out in His Support 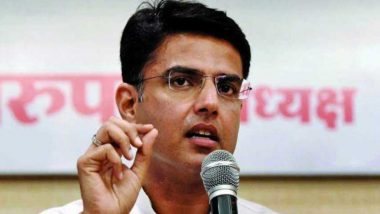 Jaipur, July 14: Former Rajasthan deputy chief minister Sachin Pilot, sacked earlier today from his post by the Congress party, posted a tweet to thank those who came out in his support today. His statement on the official social media handle comes amid reports of mass resignations of Congress cadres in Tonk and Pali, along with demonstration by his supporters in Alwar region.

Pilot, 42, was also removed from his post as the Pradesh Congress Committee (PCC) chief in Rajasthan. He was replaced by Govind Singh Dotasara - in a decision taken earlier today by the Congress high command.

The immediate trigger to the exit of Pilot and his loyalists from the Congress camp was their decision to skip the legislative party meeting called by Gehlot earlier today. According to reports, around 90 out of the 107 Congress legislators attended the meeting.

My heartfelt thanks and gratitude to all those who have come out in my support today.

"My heartfelt thanks and gratitude to all those who have come out in my support today," he posted, hours after another tweet in Hindi which read that those on path of truth can be troubled but not defeated.

Reports claim that Pilot has the backing of nearly 17 rebel Congress MLAs, who are camping at the ITC Grand Bharat resort in Haryana's Manesar. Three independents also support the former Deputy CM, taking his electoral strength count to 20.

The BJP has demanded a floor test in the Rajasthan assembly to ascertain the majority-status of Gehlot government. In the 200-member assembly, the the Chief Minister is enjoying the support of 90 Congress and 10 independent MLAs. The effective strength of the House could, however, be reduced if the Speaker disqualifies the 17 rebel Congress MLAs under the anti-defection law.

(The above story first appeared on LatestLY on Jul 14, 2020 07:47 PM IST. For more news and updates on politics, world, sports, entertainment and lifestyle, log on to our website latestly.com).