Shashi Tharoor Contemplating To Run for Congress President Post; Anyone Who Wants To Contest Can Do So, Says Cong Spokesperson

With Shashi Tharoor contemplating running for the post of Congress president, the party on Tuesday said anybody who wants to contest can do so. 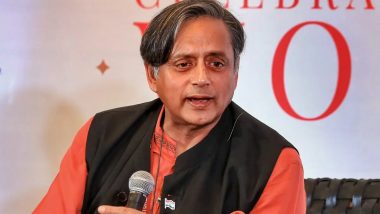 New Delhi, Aug 30: With Shashi Tharoor contemplating running for the post of Congress president, the party on Tuesday said anybody who wants to contest can do so.

According to sources, Tharoor is exploring the possibility of running for the post of Congress president though he is yet to take a final call on it. They said he has not made up his mind but could take a call on it soon.

Asked about it, Congress spokesperson Gourav Vallabh said, "I am not aware of anything like that but I understand that we announced our election schedule and given the dates of filing nomination, counting, and result."

"All dates are mentioned in the election schedule. So if anybody wants to do that (contest), the dates are there. I don't want to say anything more on this. The dates are there, the Constitution of the Congress is there, whatever you deem appropriate, you do it," he said. Delhi Excise Policy Row: CBI Found Nothing, Got Clean Chit, Claims Manish Sisodia After Probe Agency Searched His Bank Locker.

Alleging in the BJP the appointment depends on Prime Minister Narendra Modi and Home Minister Amit Shah, he said, "The Congress does not have a system where 1.5 people elect a 0.5 president."

"I want to ask through you when did elections take place in the BJP? What does its constitution say about elections? We have announced dates, we have a constitution with all details mentioned. But when did polls take place in the BJP? Which election did (J P) Nadda Ji fight? Which election did Amit Shah, Rajnath Singh, Nitin Gadkari, L K Advani fight?" he asked.

While Tharoor declined to comment on whether he would throw his hat into the ring, he has written an article for Malayalam daily 'Mathrubhumi' calling for a "free and fair" election. Murugha Mutt Seer Shivamurthy Sharanaru Booked for Sexual Abuse of Minor: Here’s How Karnataka CM Basavaraj Bommai, BS Yediyurappa, and HD Kumaraswamy Reacted.

In the article, he said given the current state of the party, the perception of crisis and the national picture, whoever assumes the mantle of president will undoubtedly need to achieve the twin goals of energising the Congress party workers and inspiring the voters.

"He or she should have a plan to fix what ails the party, as well as a vision for India. After all, a political party is an instrument to serve the country, not an end in itself," Tharoor had said.

"Either way, a free and fair election process would be a healthy way to go about settling the issue. It would legitimise the mandate being offered to the incoming president," he said.

At the press conference where the party announced the schedule for the internal election, All India Congress Committee general secretary organisation K C Venugopal said, "Anybody can contest the election. It is an open election."

Rahul Gandhi resigned as Congress president after the party suffered its second consecutive defeat in the 2019 parliamentary elections.

Sonia Gandhi, who took over the reins of the party again as interim president, had also offered to quit in August 2020 after an open revolt by a section of leaders, referred to as G-23, but the Congress Working Committee had urged her to continue.