The election of Prasad as the legislature party chief was confirmed by Sushil Modi, who served as the Deputy Chief Minister in the outgoing government. Prasad would be replacing Nand Kishore Yadav, who was the incumbent BJP legislature party leader. 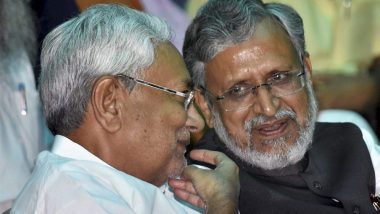 Patna, November 15: Tarkishore Prasad, the Bharatiya Janata Party (BJP) MLA from Katihar, was on Sunday unanimously elected as the legislature party leader of the BJP in Bihar. With this posting, Prasad would be presiding over the elected legislators of the BJP - both in the Bihar Assembly and the Legislative Council. Nitish Kumar Named as Next CM of Bihar, Set to Become Chief Minister For 7th Time.

The election of Prasad as the legislature party chief was confirmed by Sushil Modi, who served as the Deputy Chief Minister in the outgoing government. Prasad would be replacing Nand Kishore Yadav, who was the incumbent BJP legislature party leader.

According to reports, speculations are rife that Prasad would not only preside over as the Legislature Party chief, but may also takeover as the new Deputy CM. News 18 and NDTV were reporting that he is the likely choice to replace Sushil Modi.

Meanwhile, Nitish Kumar was on Sunday elected as the NDA legislative leader, paving his way to officially return as the Chief Minister. This would be the fourth consecutive term of Nitish, and cumulatively, his seventh term as the CM.

In the recently held assembly elections in Bihar, the NDA succeeded in winning a slim majority. The JD(U) was reduced to 43 seats, but the BJP improved its tally to 74. Combined with four MLAs of HAM(S) and three of the VIP, the coalition had succeeded in retaining power.

Tarkishore Prasad, a veteran BJP leader, is known for holding influence in eastern Bihar. He has succeeded in winning the crucial Katihar assembly constituency for four consecutive terms. He was first elected from vidhan sabha seat in 2005, followed by a victory in 2010, 2015 and 2020.

With Tarkishore taking over as the BJP legislature party chief, and speculations rife of him being appointed as the next Deputy CM, it could also mark an end of the era of Sushil Modi in state politics. The latter, according to reports, is expected to be inducted into the central government as a Union Minister.

(The above story first appeared on LatestLY on Nov 15, 2020 05:16 PM IST. For more news and updates on politics, world, sports, entertainment and lifestyle, log on to our website latestly.com).