Who Is Pushkar Singh Dhami, the New Uttarakhand Chief Minister?

Here's everything you need to know about Pushkar Singh Dhami, the new Uttarakhand CM. 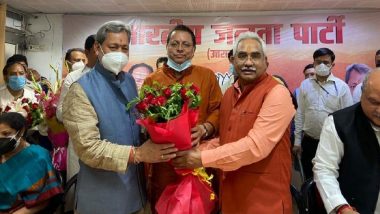 Who Is Pushkar Singh Dhami?

Born on September 16 in 1975, Pushkar Singh Dhami is a BJP MLA from the Khatima constituency in Udham Singh Nagar district of Uttarakhand. He has been elected twice from Khatima. He was an Officer on Special Duty to former Uttarakhand Chief Minister Bhagat Singh Koshiyari. He will be the third Chief Minister of Uttarakhand in four months.

According to reports, Dhami is considered close to Union Defence Minister Rajnath Singh. A post graduate and LLB, Dhami is married to Geeta Dhami. The couple has two sons. The 45-year-old also holds a diploma in Public Administration. Before entering into electoral politics, he worked in different positions in the RSS-affiliated students' wing ABVP for many years. He also served as president of BJP youth wing president in Uttarakhand for two terms.

Tirath Singh Rawat, who became Chief Minister in March this year, yesterday submitted his resignation to Governor Baby Rani Maurya. "Due to constitutional crisis, I have submitted my resignation to the Governor," he said. He had to become an elected MLA within six months of taking over. However, he had to resign as it was unlikely that bypolls would be held before his deadline of September 10.

(The above story first appeared on LatestLY on Jul 03, 2021 04:16 PM IST. For more news and updates on politics, world, sports, entertainment and lifestyle, log on to our website latestly.com).