The Calcutta High Court's division bench of Justice Harish Tandon refused to stay the order passed earlier on Wednesday by a single-judge bench of Justice Avijit Gangopadhyay directing Chatterjee, the former state education minister, to appear at the CBI office by 6 p.m. on Wednesday. 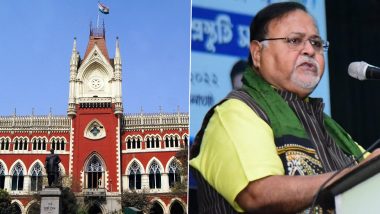 Kolkata, May 18: A division bench of the Calcutta High Court on Wednesday refused to provide a legal shield to the Trinamool Congress leader and West Bengal Commerce & Industries Minister, Partha Chatterjee from appearing before Central Bureau of Investigation (CBI) officials in connection with the recruitment irregularities in the West Bengal School Service Commission (WBSSC).

Justice Gangopadhyay also authorised the CBI to arrest Chatterjee in case of non-cooperation with the investigation process and also recommended to West Bengal Chief Minister Mamata Banerjee and Governor Jagdeep Dhankhar to remove Chatterjee from all official posts to ensure free and fair enquiry.

However, Justice Tandon's bench refused to pass any directive against the single judge bench order on grounds that appellant did not approach the division bench following proper procedures.

The division bench also observed that no order on this count can be passed based on a mere verbal appeal.

Earlier in the day, another division bench of the Calcutta High Court of Justice Subrata Talukdar and Justice Ananda Kumar Mukherjee, had upheld the earlier order by the single-judge bench of Justice Avijit Gangopadhyay ordering CBI enquiry in all the seven cases pertaining to WBSSC recruitment irregularities.

The division bench, at the same time, had sent back the case of Justice Gangopadhyay, who earlier ordered the CBI probe in the matter.

Soon after that, the single-judge bench of Justice Gangopadhyay ordered the-then state education minister and Trinamool Congress secretary general, Partha Chatterjee to be present at the CBI office at Nizam Palace in central Kolkata on Wednesday by 6 p.m.

(The above story first appeared on LatestLY on May 18, 2022 06:09 PM IST. For more news and updates on politics, world, sports, entertainment and lifestyle, log on to our website latestly.com).