Tamil Nadu Health Minister Ma Subramanian on Wednesday said that the state government would scrap outsourcing in recruitment to government departments and will only undertake direct recruitment. 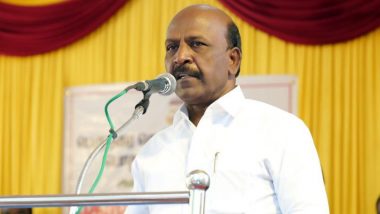 Chennai, July 21: Tamil Nadu Health Minister Ma Subramanian on Wednesday said that the state government would scrap outsourcing in recruitment to government departments and will only undertake direct recruitment.

Addressing reporters here, he said that henceforth there would not be any recruitment through outsourcing and that all hiring will be direct, as outsourcing methods were beneficial to the private agencies and not to the employees.  Tamil Nadu Weather Forecast: Flood Warning Likely in Southern Districts

Subramanian, speaking to IANS, noted that the government has decided this "as in the past ten years, no measures were taken to regularise the services of these employees and wherever we go, we get petitions on this issue".

"There are around 30,000 workers in the Health Department who were appointed on contract basis or through outsourcing in the state."

The minister said that after the lockdown is over, he would bring the matter to the notice of the Chief Minister and those required for the department would be regularised on a priority basis.

Department-wise measures would be taken from sanitary workers to doctors and sort out on those who were appointed on a contract basis and those appointed through outsourcing, and based on necessity and case by case, the postings of these employees would be regularised, he added.

The minister said that details of these persons including number of persons working on a temporary basis, number of vacancies in the department, as well as priority in appointments, would be taken up with immediate effect.

Subramanian also said that the DMK government will not remove any contract worker from service and that their work period is extended to December 2021.

He also said that the state government is conducting massive vaccination drives across the state. He said that a virtual meeting of district administrators was called by his department to apprise them of a slight increase in new COVID-19 cases, and measures were taken to curb the spread in certain districts and micromanagement has already commenced.

(The above story first appeared on LatestLY on Jul 21, 2021 08:37 PM IST. For more news and updates on politics, world, sports, entertainment and lifestyle, log on to our website latestly.com).