The Agartala-Kolkata via Bangladesh bus service, which was suspended in March 2020 after the outbreak of COVID-19 and the restrictions imposed on cross-border movement, resumed on Friday to facilitate easier ferrying of people from the northeast region of India to the rest of the country. 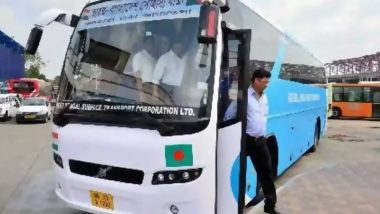 Agartala, June 10: The Agartala-Kolkata via Bangladesh bus service, which was suspended in March 2020 after the outbreak of COVID-19 and the restrictions imposed on cross-border movement, resumed on Friday to facilitate easier ferrying of people from the northeast region of India to the rest of the country.

Singha Roy said that the 40-seater passenger bus would ply six days in a week excluding Friday. From Agartala it will reach Dhaka in four hours and Kolkata in 19 hours.

In all 28 passengers -- 22 Indians and six Bangladesh nationals - boarded the airconditioned luxury bus on Friday.

Roy said that the bus service would not only help the people of Tripura and other northeastern states to go to Kolkata (with a fare of Rs 2200) and then other parts of India on a cheap fare but will also boost trade, tourism and strengthen the people to people contacts.

"In the near future, air, rail and waterway connectivity would be launched between Tripura and various cities of Bangladesh. After the completion of the work of the under construction railway line, we expect the railway service between Tripura and Bangladesh would start next year," Singha Roy said.

Bangladesh Assistant High Commissioner Arif Mohammad said after a lot of efforts, the bus service has resumed fulfilling the expectations of people of both countries.

"The passenger bus service is the symbol of �Maitri' (friendship) - that is why, we call it Maitri Bus," he added.

Tripura's Principal Secretary, Transport, Laihlia Darlong said that last month the External Affairs Ministry had given a no-objection to the Tripura, Assam, and Meghalaya governments to resume bus services with Bangladesh.

According to a bilateral agreement, the government-owned transport corporation and the Bangladesh Road Transport Corporation had started several bus services between Agartala, Shillong, Guwahati, Dhaka, and Kolkata but these were suspended due to various reasons, including the Covid-19 outbreak.

A large number of people of the northeastern states and West Bengal prefer bus rides via Bangladesh not only because of the shorter distance (around 500 km between Agartala-Kolkata) and very affordable fares, but for the exciting landscape of Bangladesh plains, emotional attachment with that country and crossing the mighty Padma river on a ferry.

In view of the railway lines cut-off in Assam from May 14, the bus service became very important for the people of Tripura, Mizoram and southern Assam to go to Kolkata and other parts of India.

Due to the railway line disruptions in Assam, the fares of different flights operating between Mizoram, Tripura, and southern Assam increased by three to four times, severely affecting the people bound for Kolkata, Delhi and other cities in India by air.

Due to unprecedented landslides triggered by heavy rain, massive damage has been caused to stations and railway tracks at over 58 locations in Northeast Frontier Railway's Lumding-Badarpur single line railway route via Dima Hasao mountainous district of Assam.

This single track railway line connects Tripura, Mizoram, Manipur and the southern parts of Assam with the rest of the country.

According to NFR's Chief Public Relations Officer, Sabyasachi De, in the hill section under Lumding Division, all trains have been cancelled till June end.

The official said that railway engineers and workers are working on a war footing to restore the rail links.

The NFR's Lumding-Badarpur single line railway route via Dima Hasao is vital for ferrying goods, fuel, and passengers to and from Tripura, Mizoram, Manipur and southern Assam's three districts - Cachar, Karimganj and Hailakhandhi.

(The above story first appeared on LatestLY on Jun 10, 2022 04:47 PM IST. For more news and updates on politics, world, sports, entertainment and lifestyle, log on to our website latestly.com).