A building promoter was shot dead in broad daylight on Saturday afternoon at Bhatpara in North 24 Parganas district of West Bengal. 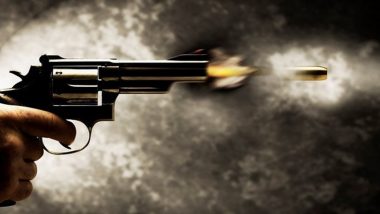 Kolkata, July 2: A building promoter was shot dead in broad daylight on Saturday afternoon at Bhatpara in North 24 Parganas district of West Bengal.

The event took place near the residence of local Lok Sabha member from Barrackpore, Arjun Singh, who has recently returned to Trinamool Congress from BJP. Karnataka Shocker: Father-Son Duo Make Video of Married Woman, Blackmail Her for Money

It is learnt that the victim has been identified as Salauddin Ansari, a local real estate promoter by profession. According to eyewitnesses, Ansari was sitting in front of his residence at around 12 noon, when suddenly three persons came to him and started talking to him.

"They even offered him a cigarette, which he accepted and smoked. However, suddenly, one of the three whipped out a firearm and fired three bullets aiming at Ansari's head from point-blank range," a local eyewitness said. Ansari died on the spot. The three immediately fled the spot.

Top officers from the Barrackpore City Police immediately rushed to the spot. They are currently trying to find out whether the reason of the murder was any business, personal or political rivalry.

However, a political spat has already started over the incident. Senior state BJP leader Rahul Sinha said that incidents of gang-rivalry and shoot-out are quite common in that area. "Almost everyday some incident of gang-war is reported from this area. All these gang members have close connections with the ruling Trinamool Congress. The police know everything but are silent," he said.

However, Arjun Singh said that BJP is unnecessarily trying to politicize the issue. "As per initial reports, this is a case of business rivalry. Investigation is on and the culprits will not be spared," said Singh.

(The above story first appeared on LatestLY on Jul 02, 2022 04:11 PM IST. For more news and updates on politics, world, sports, entertainment and lifestyle, log on to our website latestly.com).