After Beyonce, Ambanis Rope in Maroon 5 to Perform at Akash - Shloka's Sangeet Ceremony

Maroon 5 is expected to perform live at Akash and Shloka's sangeet bash in Switzerland. 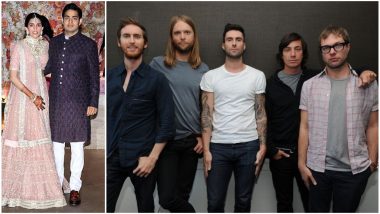 Expect the unexpected when it comes to Asia's richest family, Ambanis. If Mukesh Ambani and Nita Ambani can hire Beyonce to perform a special concert at their daughter, Isha Ambani's wedding, getting Maroon 5 on board shouldn't stun you then. Yes, you read it right and no we aren't kidding. As per reports in Economic Times, the family has hired the band to perform live at their son's sangeet ceremony in Switzerland. While entire Bollywood is currently chilling and enjoying the winter wonderland that the Ambanis and Mehtas have created, the addition of Maroon 5 will be like a cherry on the cake. Akash Ambani and Shloka Mehta’s Pre-Wedding Ceremonies Kick-Start With Dandiya-Raas, Details Inside.

Akash Ambani and Shloka Mehta's pre-wedding bash in the Swiss Alps is making noise for all the right reasons. Ranbir Kapoor and Alia Bhatt are already enjoying the ceremony with Malaika Arora and Arjun Kapoor, and Mukesh Ambani has apparently booked the entire Badrutt Palace for the big bash. From chariots to the freezing weather of Switzerland, the pre-wedding ceremony has all the trappings of a fairytale and it will go down in history as a classic example of a big fat Indian wedding. Did You Know Akash Ambani Gave His Wedding Dates to Darling Sister, Isha Ambani Piramal?

Pics from Akash and Shloka's pre-wedding bash in Switzerland

Akash Ambani and Shloka Mehta will tie the knot in a three-day wedding ceremony that will take place at Jio World Centre in Bandra Kurla Complex, with the baraat commencing from the Trident hotel at 3:30 pm and the ceremony beginning at 7.30 pm. The family will host a Mangal Parv on March 10 followed by a reception on March 11. Expect an extravaganza when it comes to Ambanis, and if Isha-Anand's wedding was too much for you, wait till you see this recent one.

(The above story first appeared on LatestLY on Feb 26, 2019 10:03 AM IST. For more news and updates on politics, world, sports, entertainment and lifestyle, log on to our website latestly.com).