Duke and Duchess of Cambridge's youngest son Prince Louis, is looking all sorts of cute in his first portrait pictures. 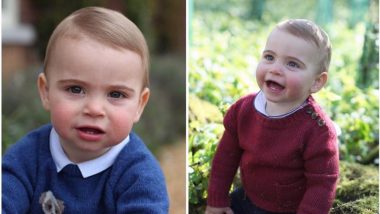 Prince Louis is looking all sorts of cute in his first portrait pictures. As the royal baby is turning one-year-old, the Duchess and Duke of Cambridge have shared some adorable portrait snaps of their youngest baby. The newly released pictures were shared on Kensington Palace's Instagram account.

Happy Birthday Prince Louis! 🎉 The Duke and Duchess of Cambridge are delighted to share this new photograph of Prince Louis ahead of his first birthday tomorrow.

For the pictures, the young prince is seen wearing a cute woollen sweater with a puppy on it. In another snap, Prince Louis is seen wearing an adorable red full-sleeved sweater with buttons on the shoulder. Hee is seen flaunting the two teeth on his lower jaw. Adorable is an understatement as the baby boy looks too cute for words. He clearly doesn't seem fazed by the camera as he is such a natural at posing. Well, the royal palace does have a lot of festivities as just recently, they celebrated Queen Elizabeth II's 93rd birthday.

The Duke and Duchess of Cambridge are delighted to share these new photographs of Prince Louis ahead of his first birthday tomorrow 🎈 The photographs were taken earlier this month by The Duchess at their home in Norfolk.‬

Soon they will be rejoicing the arrival of another royal baby as Prince Harry and Duchess of Sussex Meghan Markle are expecting the birth of their first baby by the end of this month. We can't wait for more pictures!

(The above story first appeared on LatestLY on Apr 23, 2019 09:49 AM IST. For more news and updates on politics, world, sports, entertainment and lifestyle, log on to our website latestly.com).