Ananth Talam, a Modern Artist, Holds That It Is Never Too Late To Commence Something You Cherish

Vijayawada is where the Telugu digital artist was born. He belongs to a lower-middle-class family and migrated to Hyderabad when he was young. With his hard work, Ananth earned his Bachelor of Science degree at Hyderabad. Since 2012, he has worked as a freelancer in Digital Marketing. 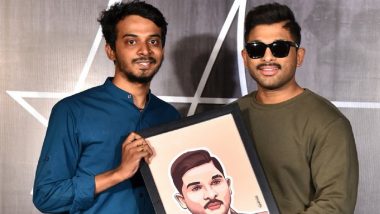 "As I work on my drawings, day after day, what seemed unattainable before is now gradually becoming possible. Slowly, I'm learning to observe and measure. I don't stand quite so helpless before nature any longer."

Van Gogh's quote says it all of Ananth Talam, who learned to observe and measure everything in his life rather than feeling helpless before nature.

Vijayawada is where the Telugu digital artist was born. He belongs to a lower-middle-class family and migrated to Hyderabad when he was young. With his hard work, Ananth earned his Bachelor of Science degree at Hyderabad. Since 2012, he has worked as a freelancer in Digital Marketing.

Ananth did quite well as a digital marketeer and he started noticing his love for art when he used to make content. He started getting better at it with every passing day. But he wanted to do and make something of his own and not for someone else.

Everyone's career has a turning point, and Ananth's was no exception. It was a watershed point in his life when he met his sister Navya through an internet friend. He found his love of painting. He realised he had always wanted to do something different with his life, and so the germ for him to become an artist was sown.

Taking inspiration from her mother who is a fashion designer, Ananth has been an art enthusiast since childhood. The artist of magnificent paintings created the artwork for his own enjoyment initially. His artwork gradually became more vibrant and attractive. At the moment, Ananth was browsing behance.net, the world's greatest creative network for presenting and discovering creative work. He discovered the vector artwork there.

Vector artwork is a kind of art that is entirely made up of vector graphics. These pictures are made up of dots, lines, curves, and shapes that are based on mathematical formulas. There is no loss of resolution or quality when scaling a vector image file, so it may be scaled to any size you choose. Vector art refers to any artwork made using vector illustration software such as Adobe Illustrator.

Ananth developed his interest in vector graphics while he was just 22 years old. On the other hand, he did not begin practising until a year and a half later. He began practising progressively by viewing YouTube tutorials. He gradually honed his vector art abilities.

Having expertise and perfection when creating art. His accuracy is so good that he can now produce images that seem so real that it's simple to confuse what's real and what's not.  His amazing artworks attracted the attention of millions of people. Unlike traditional artists who make art with pencil, Ananth Talam makes beautiful artworks with the mouse.

Being an art enthusiast, Ananth realises that an artist must focus intently on their task. To gain more knowledge about artwork, he explores the internet and reads books on the history and the techniques of art forms. He continues to look at the work of other artists. He goes to Pinterest and looks at other artist's work and seeks inspiration from their work.

The contemporary artist is an inspiration for younger people who should look up to him, his efforts, and his illustrious path. His achievements are the result of his pure determination, devotion, perseverance, and love for art.