Now, the self-proclaimed proponent of body positivity received a ton of messages. The comments' section under the said photo got flooded with Ashley Graham's fans sending her much love and appreciation. However, few of her fans though appreciative of her bold picture seemed unhappy with Ashley's caption describing herself as a 'big girl'. 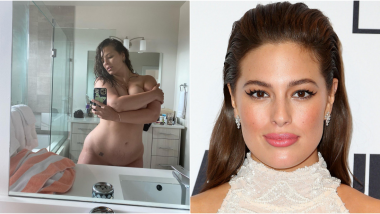 American model, television presenter and social media personality, Ashley Graham is also a doting new mother. The 32-year-old recently birthed her first child with husband Justin Ervin, a boy named Isaac in January. While the new mother keeps sharing her baby's adorable pics, she also ensures to use the online platform to spread body positivity message among other new mums. In her latest Instagram snap, Ashley Graham went fully naked to shatter body-image stereotypes again. And the crusader of body positivity did not stop at that. She went a step ahead to school several of her Insta followers over the choice of words in her caption 'nakie big girl'.

Ashley on Sunday shared a bathroom selfie that saw her ditch clothes completely. Now, if you're one of Ashley's 11.5 million Instagram followers, you should know by now that it is a usual affair. She loves her body and has zero inhibitions flaunting her 'flaws' as per beauty standards and stereotypes. Keeping up with her norm, Ashley shared this mirror selfie wherein she bared it all. While she is clicking the pic with a phone in one hand, she is using her other hand to cover her bosom. Ashley captioned this lovely image, writing, "nakie big girl" followed with a waving hand emoji. Ashley Graham Loves to Have Sex After Powerful Prayer Sessions.

Now, the self-proclaimed proponent of body positivity received a ton of messages. The comments' section under the said photo got flooded with Ashley Graham's fans sending her much love and appreciation. However, few of her fans though appreciative of her bold picture seemed unhappy with Ashley's caption describing herself as a 'big girl'. A user's comment read, "Nakie *normal* girl." Another one wrote, "Naked beautiful girl ❤️❤️❤️". One more user had this to say, "Hardly "big". More like "perfect". Netizens replaced the word 'big' with other adjectives such as 'perfect' and 'beautiful' to describe Ashley. Ashley finally addressed the matter by responding to one such comment.

One of Ashley's fan had commented, "I hate that this is seen as 'big girl' I see nothing but a beautiful, naturally curvy woman in all her glory..... super sexy and womanly ❤️." To this, the plus-size model replied, writing, "I hear what you're saying. But if you look at 'big' as a positive or love then you can see it like I do. i love my big strong beautiful body. Love you girlie.[sic]" Well, that should rest the case.

(The above story first appeared on LatestLY on Oct 19, 2020 05:07 PM IST. For more news and updates on politics, world, sports, entertainment and lifestyle, log on to our website latestly.com).