What’s the Average Penis Size Around the World? Find Out Which Countries Have the Biggest and Smallest Male Genitals

Smallest penis in the world belongs to North Korea 9.66 cm beaten by India by a frugal margin of about 3 cm. 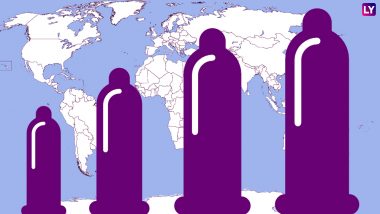 A tweet about Indian men's penis size turned into a war of words on Twitter and it is going viral ever since. The tweet had a picture of a small banana with the caption "Indian men." However, the Twitter user who posted the picture started getting trolled and was called out for shaming Indian men for having small penises. Many asked her how she would feel if someone said the same thing about Indian women's boobs? While we don't really have a stand on the topic, the tweet did leave us pondering about one thing: "What determines a person's penis size?" Penis Size Affected By Non-Stick Frying Pans? Study Reveals PFC Chemicals Can Reduce Your Manhood.

The answer may be subjective but there are real statistics available on penis sizes of people across the world, and the results are shocking. Did you know, Indian men reportedly have the second smallest penis in the world? If we don't include exceptions, the statics say that Indian men's penis sizes do not go beyond 12.26 cm on an average and fall in the list of the smallest penises in the world. According to World Data info, the average size of a penis across the world is about 14.03 cm. The report further claims that "The longest one" is 17.93 cm long and carried by men in the Democratic Republic of the Congo. Men (and women) in South Korea have to get along with only 9.66 cm."

What Determines Size of Penis?

Penis size is highly determined by genetics and body proportion. Height and other physicalities may matter in terms of the size of the penis. There may be exceptions, but it is usually the genetics that plays a key role in determining the length and girth of the penis.

Longest Penises In The World

The longest penis in the world is possessed by the men from the Republican-Democratic Republic of the Congo with an average erect size of 17.93 cm, after which are men from Ecuador who have a penile length of  17.61 cm. The next in the row, securing the third position, are men from Colombia with 17.03 cm followed by Venezuela, 17.03 cm and Cameroon, 16.67 cm.

Smallest Penises In The World

Smallest penis in the world belongs to North Korea at 9.66 cm followed by South Korea also with 9.66 cm but with an average body height of  174 cm. The third smallest penises belong to men from Cambodia at 10.04 cm followed by Thailand at 10.16 cm and Burma at 10.70 cm.

(The above story first appeared on LatestLY on Jan 25, 2019 01:19 PM IST. For more news and updates on politics, world, sports, entertainment and lifestyle, log on to our website latestly.com).