From cutesy selfies to fashion outings and promotional uploads, Amala Paul likes sharing everything with her fans. Here's taking a peek inside her Instagram account. 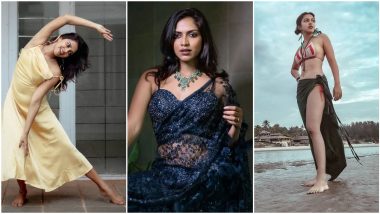 Aadai actress Amala Paul is an October baby and she celebrates her birthday today. While she's a fine performer and looks magical onscreen, she's equally amazing in real life too. She's a social media addict and her pictures on Instagram are delightful to, say the least. She keeps updating her fans with all the happenings of her life and they do wait for all her updates. For someone who enjoys a massive fan following of 3.9 million, Amala is quite the girl that everyone wants to talk about. Amala Paul Sizzles in a Bikini in This Sexy Beachside Click (View Pics).

From cutesy selfies to fashion outings and promotional uploads, Amala Paul likes sharing everything with her fans. While we root for the ones where she poses in her sartorial wonders, we also admire the clicks where she likes keeping it real and showing her real, goofy self. Amala Paul has certainly carved a name for herself in the acting industry and the future looks bright for her. Think we are exaggerating? Well, ask her social media fam what they think about her? They certainly consider her a Goddess and don't mind worshipping all her Instagram clicks. Let's have a look at some of those pictures below. Madras High Court Rules In Amala Paul's Favour, Directs Ex-Boyfriend Bhavninder Singh Against Posting Their Personal Pictures.

Showing Off Her Inner Ballerina

Traditional Beauty at Its Best!

If You Have It, Flaunt It

Amala recently joined the list of actors who marked her digital debut in 2021. She was seen in an Aha web series Kudi Yedamaithe. Directed by Pawan Kumar, it was an eight-episode time-loop series wherein she played the role of a circle officer Durga Goud. Her performance was much appreciated and that makes us wonder if her next announcement will come very soon. On that note, here's wishing Amala a fabulous and successful year ahead.

(The above story first appeared on LatestLY on Oct 26, 2021 09:05 AM IST. For more news and updates on politics, world, sports, entertainment and lifestyle, log on to our website latestly.com).