While Manushi Chhillar continues to make some ethereal appearances in traditional cuts, her modish avatars are equally delightful and stunning. 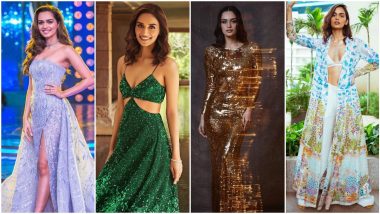 Former Miss World from India, Manushi Chhillar celebrates her birthday on May 14. History speaks for itself, right? While her peers like Aishwarya Rai Bachchan and Priyanka Chopra Jonas entered Bollywood soon after winning the glory for their country, Manushi too, wasn't far behind. YRF signed her on to star as princess Sanyogita alongside Akshay Kumar in the historical drama, Prithviraj. While the wait for her debut was too long, we kept ourselves occupied with her Instagram pictures and different social appearances. Happy Birthday Manushi Chillar: 8 Fascinating Facts About the Former Miss World That You May Not Have Known.

Manushi's personal fashion sense is quite impressive. She is blessed with a tall and lean frame and can ace different designs and silhouettes as easily as one, two, and three. And while she continues to make some ethereal appearances in traditional cuts, her modish avatars are equally delightful and stunning. She can be a perfect muse for any designer out there and every time she decides to attend an event, we and her tons of followers are in a treat for her fashion shenanigans are never disappointing. To elaborate on the same, let's quickly delve into some of her best fashion looks from the recent past. Manushi Chillar Vs Warina Hussain: Who Slayed in a Thigh-High Slit Black Dress? (See Pics).

In Jade by MK

Manushi's debut movie, Prithviraj is slated to release on June 3. The movie's trailer was recently unveiled by the makers and it received some warm reactions. The movie will also mark Akshay's first attempt in a historical drama genre. The movie also stars Sanjay Dutt and Sonu Sood in key roles.

(The above story first appeared on LatestLY on May 14, 2022 09:00 AM IST. For more news and updates on politics, world, sports, entertainment and lifestyle, log on to our website latestly.com).