Rashami Desai in Printed Jumper or Mini Skirt and Tube Top, Which Hot Look in Trending Videos Gets Your Vote?

Rashami Desai never fails to impress her fans with her stylish looks. Time and again she has proven that she is the ultimate glam queen. Recently, she has shared two videos on her Instagram handle and her fans are going gaga over her looks. 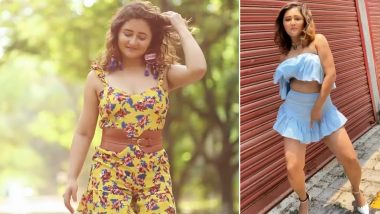 Rashami Desai is one of the most-loved celebrities in the Indian television industry.  The actress enjoys a major fan following on social media. The 35-year-old definitely knows how to keep her fans entertained and updated as she keeps sharing interesting pictures and videos of her on her Instagram handle. Recently, Rashami took to her social media handle to share a few dance videos in which she can be seen flaunting her electrifying dance moves.  However, apart from her dance moves, her stylish outfits have caught all the attention.

In one of the videos, Rashami can be seen dancing to Cardi B's "Up" song. And the actress is looking all glamourous in a baby blue crop top and matching mini skirt. To glam up her overall look, she has opted for a statement neckpiece and kept her tresses open.  She is looking extremely hot in the same. While sharing the video, she wrote, "I know that’s right.."

Soon after she posted the video, several fans started commenting on her post. One of her fans wrote, “Omfg!! Youuuuu stunner! Rashuuuuuu you setting the bar freaking high” while another one wrote, “Killing it.” Rashami’s colleagues and friends from the industry have also heaped praises on her post.

In another video, the actress can be seen walking in slow motion while Falak Tak song from Tashan playing in the background.  Rashami can be seen donning a floral printed jumper and she is looking absolutely chic in the same.

On the work front, Rashami came into the limelight after starring in a popular daily soap titled Uttaran. However, she made her TV debut with Ravan on Zee TV. Later, she has featured in several popular TV serials which include Dil Se Dil Tak, Naagin 4: Bhagya Ka Zehreela Khel, and Ishq Ka Rang Safed. She has also participated in the most popular reality show Bigg Boss 13, hosted by Bollywood superstar Salman Khan. Reportedly, Rashami will soon make her digital debut with the web series Tandoor alongside Tanuj Virwani.

Now, enjoy watching the latest videos of Rashami Desai, and let us know in the comment section which hot looks of her gets your vote.

(The above story first appeared on LatestLY on May 10, 2021 07:42 PM IST. For more news and updates on politics, world, sports, entertainment and lifestyle, log on to our website latestly.com).