Shehnaaz Gill Dazzles in a Sequin Dress by Rocky Star, the Price of the Dress Can Fund One Trip Around India (View Pic)

For her makeup, the former Bigg Boss contestant opted for bronze eyeshadow, nude shade of lipstick and highlighter. She completed the look with some bronzer. 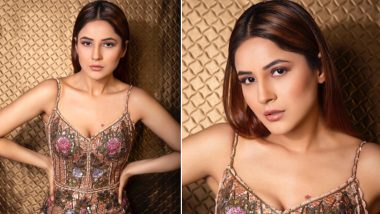 Ever since Shehnaaz Gill made an exit from the Bigg Boss house, she has worked hard on herself. From her physique to her fashion choices, Shehnaaz has upgraded to a level where everyone is talking about her sartorial choices. The actress often shares stunning pictures of herself on social media in different attires and manages to rock any look like a diva. She is seen opting for dresses customised by designer Rocky Star a lot and for her recent outing too, the actress wore a dazzling ensemble that looked amazing on her. Shehnaaz Gill Undergoes Gorgeous Transformation, Says Being Body-Shamed on Bigg Boss 13 Fuelled Her.

Shehnaaz's dress was a signature handcrafted floral dress from Rocky Star. It featured a figure-defining silhouette and an open back cut. The outfit had detailed sequin work on the front and the bronze colour of the dress suited Shehnaaz. The dress had a plunging neckline that accentuated Shehnaaz's collar bone. She posed for the camera while flaunting her look.

For her makeup, the former Bigg Boss contestant opted for bronze eyeshadow, nude shade of lipstick and highlighter. She completed the look with some bronzer, contour, mascara and brushed eyebrows. She ditched wearing any jewellery and let the dress do the talking. Although Shehnaaz only posted close up pictures of herself, we are sure the actress was looking stunning in the dress.

Shehnaaz sure looked like a diva in the attire but the price of the dress will shock you. Costing at a whopping amount of Rs 97,199, the budget for this dress is enough for one trip anywhere around India. Previously also, Shehnaaz had worn dresses by the designer that ranged around a lakh. Shehnaaz Gill's 'Tuada Kutta Tommy' Dialogue Gets a Quirky Musical Touch, Courtesy 'Rasode Mein Kaun Tha' Fame Yashraj Mukhate.

Shehnaaz was recently seen alongside Salman Khan on the Bigg Boss 14's Weekend Ka Vaar episode. She arrived with Dharmesh Yelande to celebrate Khan's birthday. The actress opted for a yellow gown for her arrival on the sets of the reality show. She interacted with the contestants and gave a few of them some advice on how to go ahead in the game.

On the work front, she was last seen alongside Sidharth Shukla in Tony Kakkar's song "Shona Shona."During the release of the song, she also came into the limelight when her father got upset from her and decided to cut ties with her. His father was angry that even after being so close to home, the actress did not come and meet her family even once.

(The above story first appeared on LatestLY on Dec 28, 2020 04:33 PM IST. For more news and updates on politics, world, sports, entertainment and lifestyle, log on to our website latestly.com).