What Is Wolf Cut Hair Style? A History On a Hair Trend Revived By K-POP and Now Taking Over The Internet

Bille Eilish first broke it, then K-Pop Idol Beomgyu, a member of TXT (Tomorrow X Together) bought it and the rest is a hairy history that eventually put the Wolf Cut on the Gen Z map. Here's a brief history on Wolf Cut - a hybrid of a layered shag and a mullet. 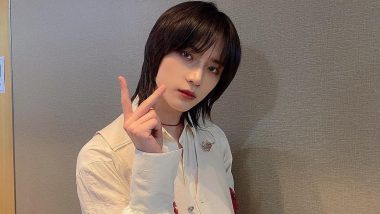 Bille Eilish first broke it, then K-Pop Idol Beomgyu, a member of TXT (Tomorrow X Together) bought it and the rest is a hairy history that eventually put the Wolf Cut on the Gen Z map. Back in March, Billie Ellsih broke Instagram records when a photo of her newly cut blonde hair achieved a million likes in six minutes. The singer sported summers latest trend dubbed the Wolf Cut - a hybrid of a layered shag and a mullet. Then in June, the K-pop Singer Beomgyu debuted his new look and  Nothing sets the social media's hearts aflutter than a beloved k-pos idol with long hair. If you are not a hermit or Fran Lebowitz, you might have seen the Wolf Cut tag that adorns the TikTok feeds of millions of Gen Z folks who have made this trend quite popular with over 230 million views.

The fervour is so high that now people are taking scissors to their own hands and hair, with results that often skews the scale more in favour of a mullet with a smidgen of shag. Not a great look peeps. It's time to call in the professionals. While this trend might have gained notoriety in 2021, it is interesting to note that this shaggy popular cut has long graced the salons of South Korea. If not that specific style, at least polarizing variations of the wolf cut, that range from Short Shags, Soft Mullets, Husg Cuts have been in the K-Pop repertoire for decades. Soccer star Kim Byungji popularized sported the OG Wolf Cut way back in the 1990s.

Way before Miley Cyrus, Debby Ryan and Korean Idol TVXQ's Jaejoong bought varied imitations of this style into the foray, “Kim Byungji haircut" became a major trend for South Korean men. It also became synonymous with the tough-guy image; Case in point - MacGyver folks. The brainy, brawny fictional dude who was always blowing things up, sported a similar style in the television show between the 1980s to 1992. The show was quite popular in South Korea. So this haircut has long been part of the South Korean entertainment industry. The haircut was also sported by David Bowie in the '70s and many models and actors - Check out Patrick Swayze Circa 1980's -  followed suit. However, as seasons change, trends do too.

EXO's Baekhyun is said to be credited at reviving the trend in 2017 when he sported the look with a two-toned red and chocolate wolf cut during the group's "Ko Ko Bop" era. And now in an era where we are recycling everything from show to movies, it was only a matter of time before hairstyles made it to the recycled list. With Gen Z just discovering shows of the yesteryears, the Wolf Cut has also made it to the frenzied list and seems like it's here to stay at least for the year.

(The above story first appeared on LatestLY on Jun 16, 2021 02:03 PM IST. For more news and updates on politics, world, sports, entertainment and lifestyle, log on to our website latestly.com).