The ancient festival was started after Nepal got victory Tibet in 1887 B.S. It started first in Betrawati with 10 pairs of bulls fought to mark the day. 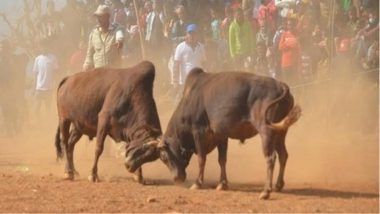 The bullfights have become a popular mark of traditional culture.(Photo credits: ANI)

Nuwakot [Nepal], January 16: Like Indians ushered in welcoming the first festival of the calendar year, Makar Sankranti, Nepal too celebrated the festival with the tradition of bullfighting. Called the Maghesakranti, it is similar to the Jalikattu festival in Tamil Nadu or the Spanish Bullfights. In the mountainous district of Nuwakot, about 75 kilometers from the capital Kathmandu, the villagers had organized a bullfight. The tradition dates back to 1887 B.S. was introduced by then Prince of Bajhang Jay Prithivi Bahadur Singh for entertainment purpose while visiting his maternal uncle's house.

The locals of Taruka village have been following the tradition for years and it has become an esteemed event today. The annual festival has been held from 225 years, naturally attracting people from adjoining districts. The atmosphere was filled with festive fervor and dust hovered above the field as the age-old bullfighting festival commenced here.

"This is the tradition which we farmers have continued for years. We have been herding the bulls, and the government has been giving allowance to buy the tractors. However, we are not getting any sort of help or aid despite preserving the tradition for long," said Bhoj Bahadur Bhandari, a participant of this tradition, while speaking on the growing influence of the modern technologies to ANI.

The ancient festival was started after Nepal got victory Tibet in 1887 B.S. It started first in Betrawati with 10 pairs of bulls fought to mark the day. Taruka, on the other side, witnessed the fight between 20 pairs of bulls on the same day. Although the economic crisis impacts farmers and bull owners, they can not let go of not celebrating the tradition. Besides, the festival is so popular part of the traditional Himalayan culture that it significantly contributes to the tourism development in the area.

(The above story first appeared on LatestLY on Jan 17, 2018 10:54 AM IST. For more news and updates on politics, world, sports, entertainment and lifestyle, log on to our website latestly.com).