Chhatrapati Shivaji Maharaj Punyatithi 2020: Brave Stories of Shivaji From Maratha History That Remember Him as a Great Warrior

With his way of guerrilla warfare techniques and using military tactics, Shivaji Maharaj has some of the greatest anecdotes of bravery. On his 340th death anniversary, we tell you three instances which depict the bravery of the great Maratha leader. 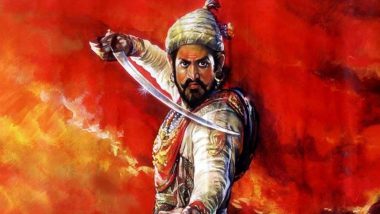 Today marks a very important day in the history of the Maratha Kingdom, it is the day when they lost their warrior leader, Chhatrapati Shivaji Maharaj. He was one of the revered warrior leaders in the freedom struggle. On April 3, 1680, Shivaji Maharaj breathed his last on Raigad fort in Maharashtra. In the course of his rule, he engaged in several battles and took on hostilities with the Mughal Empire, Sultanate of Golkonda and Sultanate of Bijapur and also the European colonial powers. With his way of guerrilla warfare techniques and using military tactics, he has some of the greatest anecdotes of bravery. On his 340th death anniversary, we tell you three instances which depict the bravery of the great Maratha leader. Chhatrapati Shivaji Maharaj Punyatithi 2020: Significance, and History of The Observance Remembering The Great Maratha Warrior.

Mughal governor Shaista Khan weakened the financial condition of Maratha state. To improve the finances, Shivaji Maharaj planned an attack on Surat, a wealthy port in the Mughal Empire in 1664. With a cavalry of 4,000 he attacked the port. Surat was under attack for nearly three days in which the Maratha army looted all possible wealth from the Mughals and Portuguese trading centres. He managed to sack and loot Surat before Mughals in Delhi were alerted. This wealth was used to develop the Maratha State.

In 1660, Shaista Khan, one of the able ministers of Aurangzeb was sent o Aurangabad to defeat Shivaji. He seized Pune, the centre of Shivaji's rule. He brutally ruled on the region while Shivaji Maharaj waited patiently for an attack. In April 1663, Shivaji disguised and entered in Pune. At midnight, Shivaji and his forces entered the palace and made a sudden attack. And caught off-guard, Shivaji cut off all of Shaista Khan's forefingers with his sword. It was one of the bravest acts in medieval history. Chhatrapati Shivaji Maharaj 340th Punyatithi: Interesting Facts To Know About The Brave Maratha Warrior On His Death Anniversary.

Shivaji's escape from Mughal Emperor Aurangzeb's guest house in Agra is one of the best use of guerilla tactics by the Maratha warrior. Shivaji was then put under a house arrest after Aurangzeb insulted him in the royal court. After three months in August 1666, Shivaji faked a stomach ache and a doctor was called in. After three days, he expressed to pay his respect to goddess Bhavani in the form of sweets and money, to distribute some to the poor. So sweets were called in huge quantities and sent out in baskets. On 17th August 1666, Shivaji along with his son Sambhaji escaped the guesthouse hiding in these baskets. And courtiers of Shivaji were dressed in his disguise. Shivaji went off to Mathura to seek refuge.

These are some of the instances, which show how Shivaji Maharaj was a master of his skills, used different military tactics. He was called a "Mountain Rat" by Aurangzeb and his generals because of his methods. he and his army used unusual and out of the box ways to fight the enemy in the most treacherous terrain.

(The above story first appeared on LatestLY on Apr 03, 2020 09:08 AM IST. For more news and updates on politics, world, sports, entertainment and lifestyle, log on to our website latestly.com).