Constitution Day 2020: Fascinating Facts That Commemorates the Signing of the US Constitution 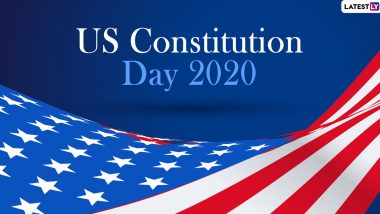 Constitution Day, also known as Citizenship Day recognises the adoption of the US Constitution. It is observed on September 17, the day in which the constitution was adopted in 1787, and “recognize all who, by coming of age or by naturalization, have become citizens.” This commemoration originated in 1940, when Congress passed a joint resolution requesting the President to set aside the third Sunday in May for the public recognition of those with  American citizenship. The designation for this day was “I Am An American Day.” In 1952 Congress repealed this joint resolution and passed a new law moving the date to September 17 to commemorate “the formation and signing, on September 17, 1787, of the Constitution of the United States.” On United States Constitution Day, we bring to you some interesting facts about the observance.

The day was designated as “Citizenship Day” recognising all those who had attained American citizenship. This law urged civil and educational authorities of states, counties, cities and towns to make plans “for the complete instruction of citizens in their responsibilities and opportunities as citizens of the United States and of the State and locality in which they reside.”

On Constitution Day, the President of the United States can choose to issue a proclamation that all governmental bodies must display the Flag of the U.S. on all of their buildings other than schools. Various events on talks about the US Constitution, are held. People raise the American Flag and hold a parade.

(The above story first appeared on LatestLY on Sep 17, 2020 10:00 AM IST. For more news and updates on politics, world, sports, entertainment and lifestyle, log on to our website latestly.com).