Eid Moon Sighting in India, Chand Raat 2020 News Updates: Eid Ul Fitr on May 25 Across India Except Kashmir and Kerala; Shawwal Crescent Not Sighted in Other Regions

While Eid will be celebrated in most parts of India on Monday, an exception to the list is Kashmir Valley, Kerala and the coastal districts of Karnataka where the festival would be observed tomorrow. The Shawwal crescent was not sighted in other states and union territories on Saturday. LatestLY wishes all our readers Eid Mubarak!

Shawwal moon has now been sighted in the valley & my local mosque is announcing that tomorrow #EidAlFitr will be celebrated. Eid mubarak to all of you.— Omar Abdullah (@OmarAbdullah) May 23, 2020

Eid ul Fitr to be celebrated on May 25 across India as the Shawwal crescent has not been sighted, confirmed the Hilal Committees. Mosques across the country will remain closed, with only the Imam, Muezzin and Khadim likely to be permitted to offer prayers. The general populace will be barred from visiting the mosques or Eidgahs under any circumstances. The restrictionary measure is imposed to contain coronavirus transmission. The Eid prayers are to be offered from homes, said top clerics of the nation.

The Ruet-e-Hilal Committee in Gujarat has also confirmed the negative sighting of Shawwal moon in the state. With the crescent not being visible, Eid Al-Fitr in the state, along with all other parts of India barring Kerala and coastal Karnataka, would be celebrated on Monday, May 25.See Statement 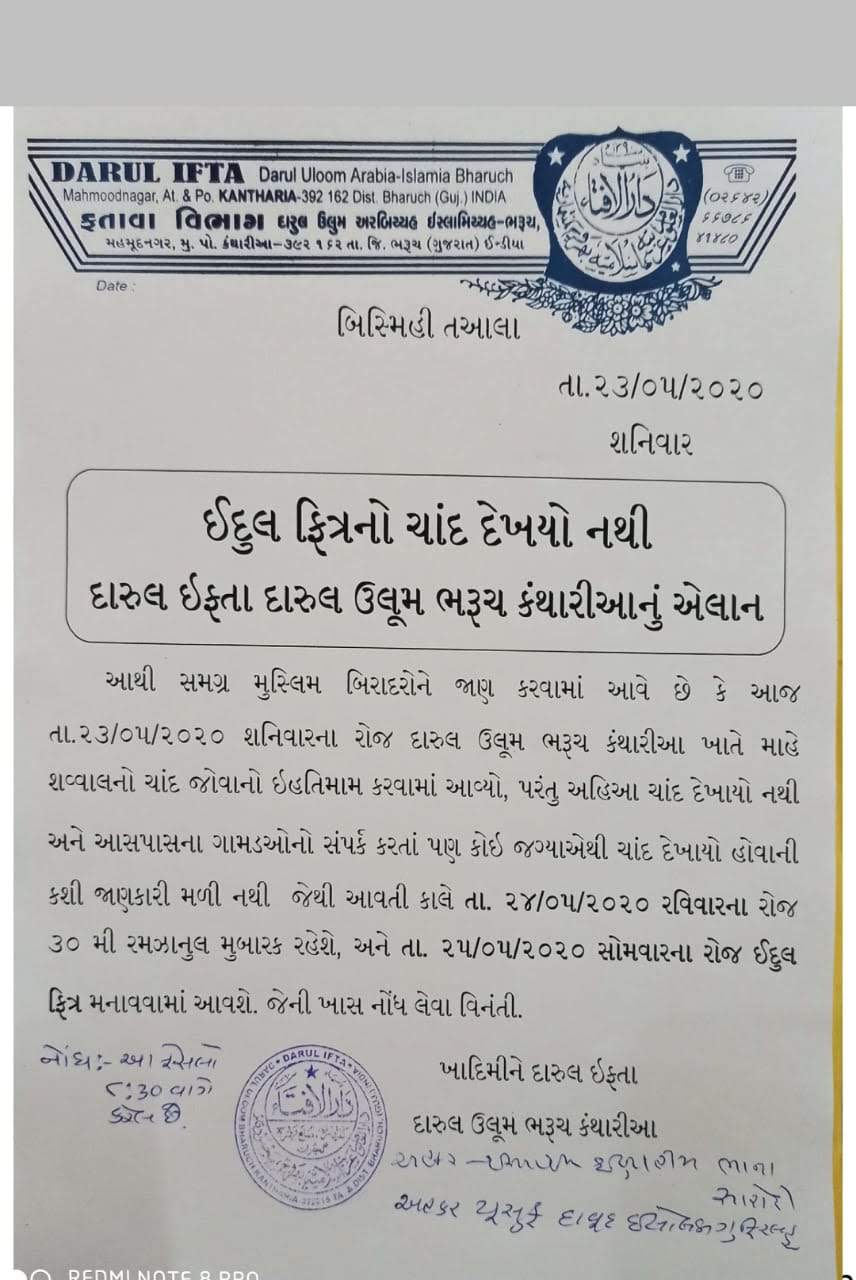 Shawwal crescent not sighted in India, confirmed a statement issued by Markazi Chand Committee of Maulana Khalid Rashid Firangi Mahali. Eid Al-Fitr in India will be celebrated on Monday, May 25.

The crescent moon of Shawwal was not sighted in India today. Hence Eid Ul Fitr will be celebrated on 25th May 2020 in India. @khalidrasheed @SufyanNizami @CNNnews18 @news18dotcom #Eid #EidUlFitr pic.twitter.com/DTS8VY8jZu— Qazi Faraz Ahmad (@qazifarazahmad) May 23, 2020

Shawwal Crescent Not Sighted, Eid ul Fitr on May 25, Announces Sunni Ruyat-e-Hilal Committee in Mumbai
23 May, 20:14

The Shawwal crescent has not been sighted in Mumbai, confirmed a statement issued by the Sunni Ruyat-e-Hilal Committee. Eid al-Fitr will be celebrated on Monday, May 25.

"Eid ul-Fitr to be celebrated on May 25 as moon could not be sighted today. It's important that we take precautions and maintain social distancing. We should stay away from shaking hands and hugging. We should follow government's guidelines," said Delhi's Jama Masjid's Shahi Imam, Syed Ahmed Bukhari.

#EidUlFitr to be celebrated on May 25 as moon could not be sighted today. It's important that we take precautions&maintain social distancing. We should stay away from shaking hands & hugging. We should follow govt's guidelines: Delhi's Jama Masjid's Shahi Imam, Syed Ahmed Bukhari pic.twitter.com/QWyN7yxt3D— ANI (@ANI) May 23, 2020

Hilal Committee Meeting of Majlis Ulema-e-Decca Underway in Hyderabad
23 May, 19:57

The meeting of Hilal Committee, convened by Majlis Ulema-e-Deccan, is underway in Hyderabad under the chairmanship of Maulana Syed Qubool Pasha Quadri. An announcement on Shawwal crescent sighting is expected shortly.

Bangladesh Confirms Negative Sighting of Shawwal Crescent, Eid Al-Fitr on May 25
23 May, 19:45

Bangladesh has confirmed the negative sighting of Shawwal crescent as no testimonies were received. The National Moon Sighting Committee has confirmed May 25 as the date if Eid Al-Fitr observance.

No Reports of Crescent Sighting So Far, Hilal Committees in Mumbai, Delhi, Kolkata to Announce Shortly
23 May, 19:34

No reports of moon sighting in any part of India has been received so far. The moon sighting committees are deliberating and waiting for any testimony. An official announcement is expected any time from now. Stay tuned for the updates.

Hilal Committees in Mumbai, Delhi, Kolkata to Announce on Shawwal Crescent in Next Few Minutes
23 May, 19:07

Hilal Committees in Mumbai, Delhi, Kolkata and Patna, along with other cities of India, are expected to announce on the sighting of Shawwal crescent in the next few minutes. Stay tuned here for the live updates.

Muslims across India will await the decision of moon sighting committees on whether the crescent of Shawwal has been sighted. The 29th fast of Ramadan is observed today and Eid Al-Fitr will be celebrated tomorrow if the moon is sighted. If the crescent remains unseen, then the month of Ramadan would complete its 30-day cycle and Eid will be observed on Monday. Stay tuned here for the live news updates on Eid 2020 moon sighting as 'Chand Raat' begins after Maghrib prayers. Read Here For Moon Sighting Updates From Other Parts of the World.

In India, the decision on crescent sighting is finalised independently by the respective moon sighting committees in each states. Muslims across the country would also be glued to the decision being taken by the prime hilal committees in Delhi, Mumbai, Lucknow, Chennai, Patna, Hyderabad, Ajmer, Bareilly and Kolkata.

Ramadan, also referred as Ramzan in India, began in the country on April 25 - a day after Saudi Arabia, UAE and other parts of the Middle East. Across the Gulf countries barring Oman, moon sighting was attempted on Friday as they began Ramadan a day earlier. Since the moon was not sighted, Eid observance in those countries was declared for Sunday.

Apart from India, neighbouring countries of Pakistan, Bangladesh and Sri Lanka would also attempt the sighting of crescent today. The decision to be taken by Pakistan could also influence the announcement of moon sighting body in Jammu & Kashmir due to geographical proximity.

Pakistan's Science Minister Fawad Chaudhary announced that moon is can be sighted on Saturday evening and Eid should be celebrated on Sunday. His suggestion, based on astronomical data, is  not binding upon the country's Muslims as they will await the final decision to be taken by Mufti Muneeb ur Rehman, the chairman of Central Ruet-e-Hilal Committee.