Festival is a tool to bring life to a state of exuberance and enthusiasm. Each festival has its own significance and meaning. The month of February is full of a variety of events and celebrations. We have made February 2022 event and festival calendar, along with a list of bank holidays. Plan out your days, weeks, and weekend accordingly. Check out the calendar below. 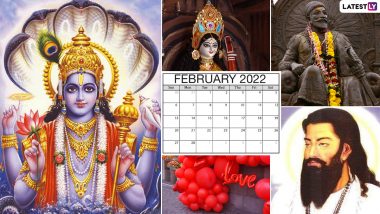 India is a land of diverse culture and rich heritage with a plethora of colourful and joyous festivals with sacred history. The country celebrates every festival with utmost gusto and zest. Festivals are the ideal occasions to take a break from stress and create memorable times. The first month of the New Year was tied up with tons of festivals from Makar Sankranti to Republic Day. Likewise, February also has its own list of cheery festivals and events. Although this month has fewer holidays compared to other months of the year. The month starts with the most popular festival of the traditional lunisolar calendar- Chinese New Year that will begin from 1st February, followed by the popular Hindu Festival Vasant Panchami on 5th February. In West Bengal, the day is celebrated as Saraswati Puja, where people offer prayers to Saraswati, the goddess of wisdom. Lala Ramswaroop Calendar 2022 for Free PDF Download: Get Panchang With List of Hindu Festivals, Events, Dates of Holidays, Fasts (Vrat) and Horoscope (Rashifal) in New Year Online.

Then we have Valentine's Day or the Feast of Saint Valentine on 14th February. Originated as a Christian feast day, there are a number of martyrdom stories associated with the day. There are in total seven days before Valentine's day which are celebrated in distinct manners and ways. Valentine's week starts from Rose day on February 7th, followed by propose day, chocolate day, teddy day, promise day, hug day, and at last kiss day on 13th February before the main occasion. February also marks two main birth anniversaries of well-known figures Guru Ravidas and Chhatrapati Shivaji Maharaj. On 16th February Guru Ravidas Jayanti is celebrated with extreme joviality in North India and on 19th February the state of Maharashtra has its official holiday for the occasion of Shivaji Jayanti. Given below is a list of all the major festivals and events that will fall on the month of February.

Apart from these festivals and events, banks will remain closed for 12 days in February month of this year, with some state-wise exceptions.

It suffices to say that the number of festivals we enjoy is one of the ways in which it makes us feel proud of it. So plan your trip and gatherings according to the calendar above and make the most of the month.

(The above story first appeared on LatestLY on Jan 27, 2022 01:43 PM IST. For more news and updates on politics, world, sports, entertainment and lifestyle, log on to our website latestly.com).