The most famous nurse in history, Nightingale's experiences as a nurse during the Crimean War led her to reform healthcare and establish St. Thomas’ Hospital and the Nightingale Training School for Nurses in 1860. Here are a few Inspirational quotes in honour of her birth anniversary. 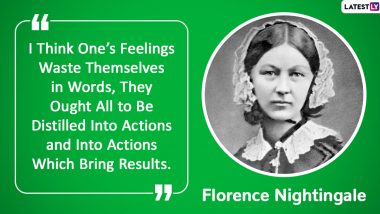 Known as “The Lady With the Lamp,” Florence Nightingale was a British Nurse who revolutionized modern nursing. A pioneer in the field of nursing, she served in the Crimean War and tended to wounded soldiers who she found were needlessly dying due to the unsanitary surroundings in the war. There she delved deep into the correlation between hygiene and mortality rates. She discovered that good hygiene practices were conducive to decrease the rate of infection among people. Her experiences as a nurse during the Crimean War led her to reform healthcare and establish St. Thomas’ Hospital and the Nightingale Training School for Nurses in 1860. Here are a few Inspirational quotes in honour of Florence Nightingale's birthday anniversary which laid the foundation for International Nurses Day. 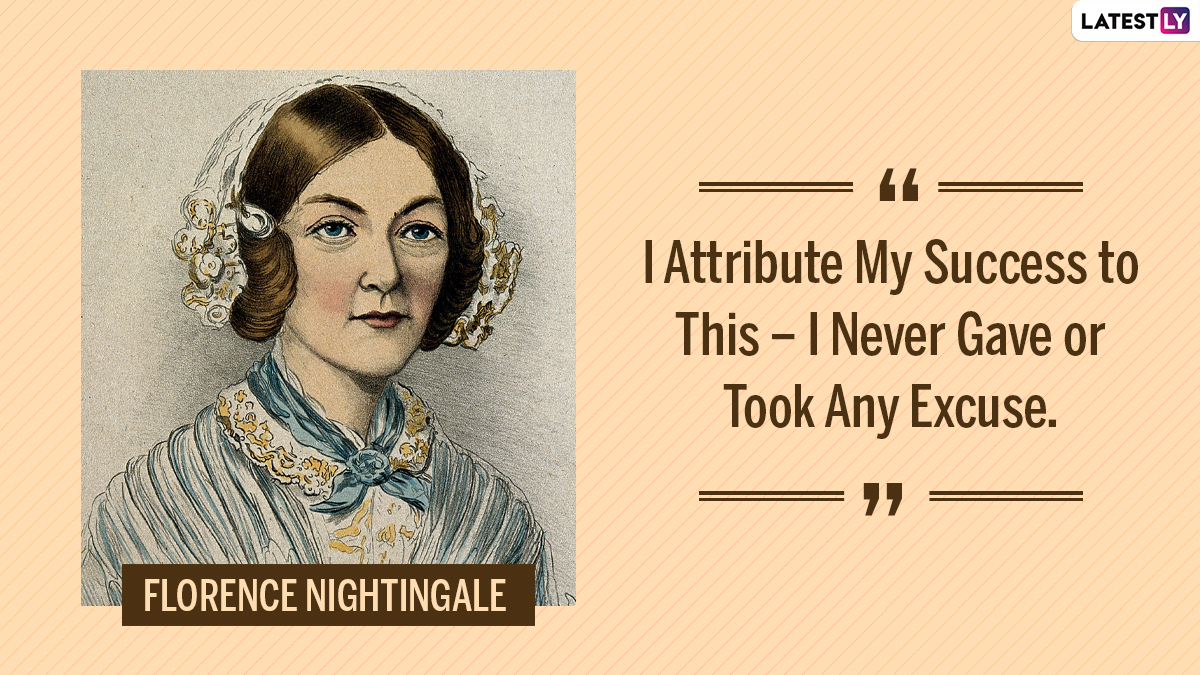 “I Attribute My Success to This – I Never Gave or Took Any Excuse.” Florence Nightingale 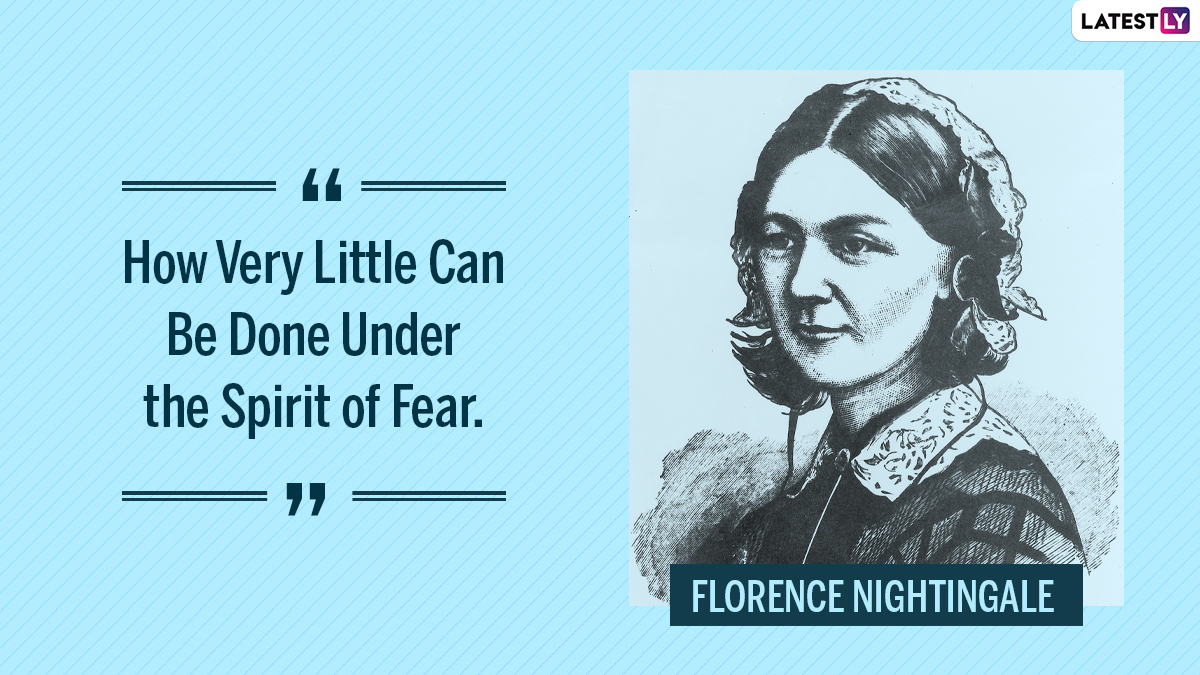 “How Very Little Can Be Done Under the Spirit of Fear.” Florence Nightingale 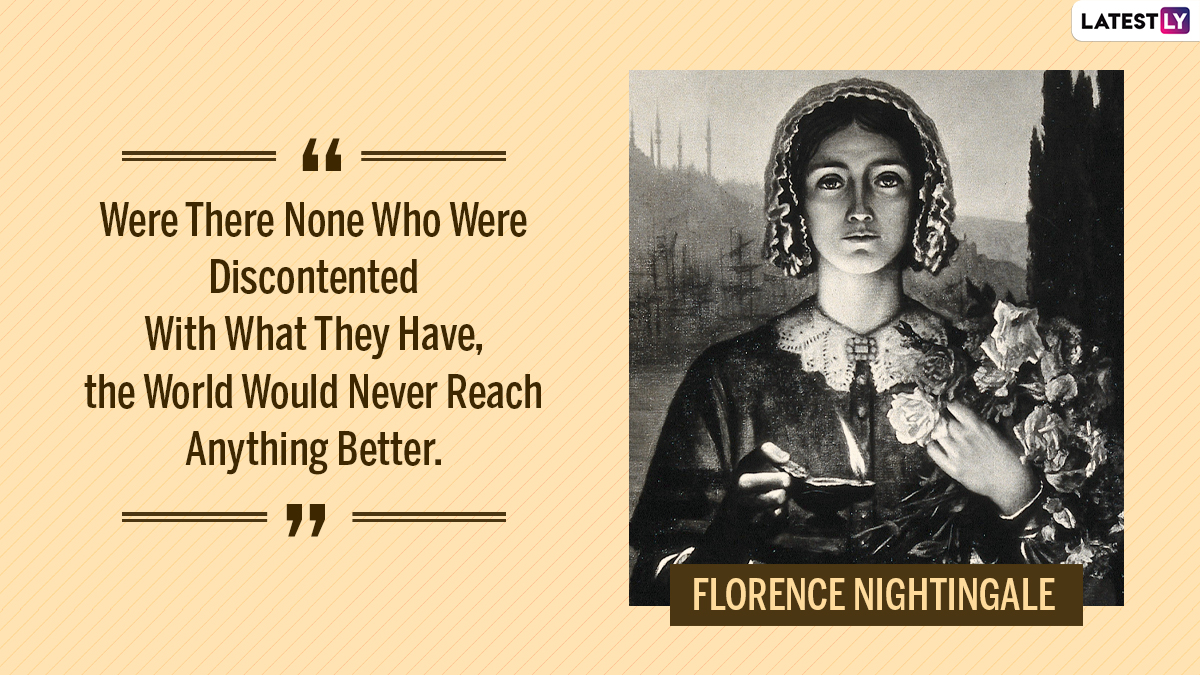 “Were There None Who Were Discontented With What They Have, the World Would Never Reach Anything Better.” Florence Nightingale
Florence Nightingale was born on May 12, 1820, in Florence, Italy, Florence belonged to an affluent British family. As a daughter of a peer in the 19th century, she was expected to live a life of leisure by marrying rich and probably eating peeled grapes for the rest of her life. So when Florence decided to become a nurse, to say her parents were highly displeased would be an understatement. We suspect they very close to casting her as the heroine of Henry James novel, where when a young lady acts up, you usually shipped them off to Europe to travel to learn the error of their ways. However, Florence was having none of that. A willful girl who had a higher calling at the age of 17 was certainly not going to let anyone stop her in pursuit of that calling. 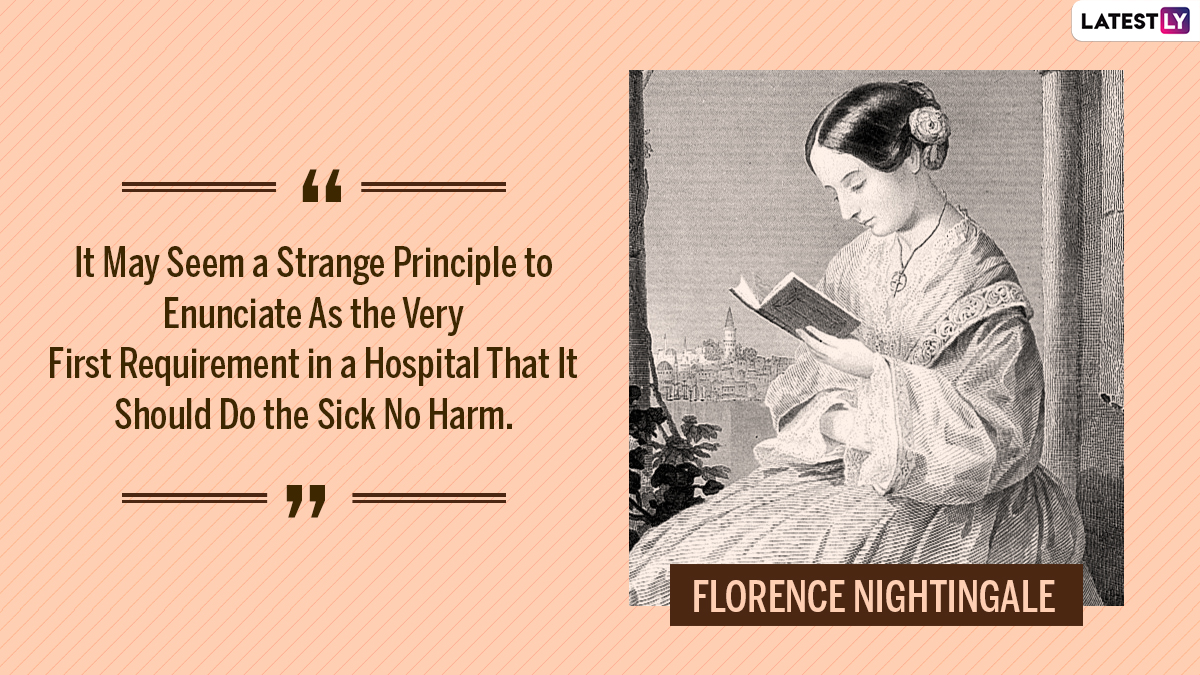 “It May Seem a Strange Principle to Enunciate As the Very First Requirement in a Hospital That It Should Do the Sick No Harm.” Florence Nightingale 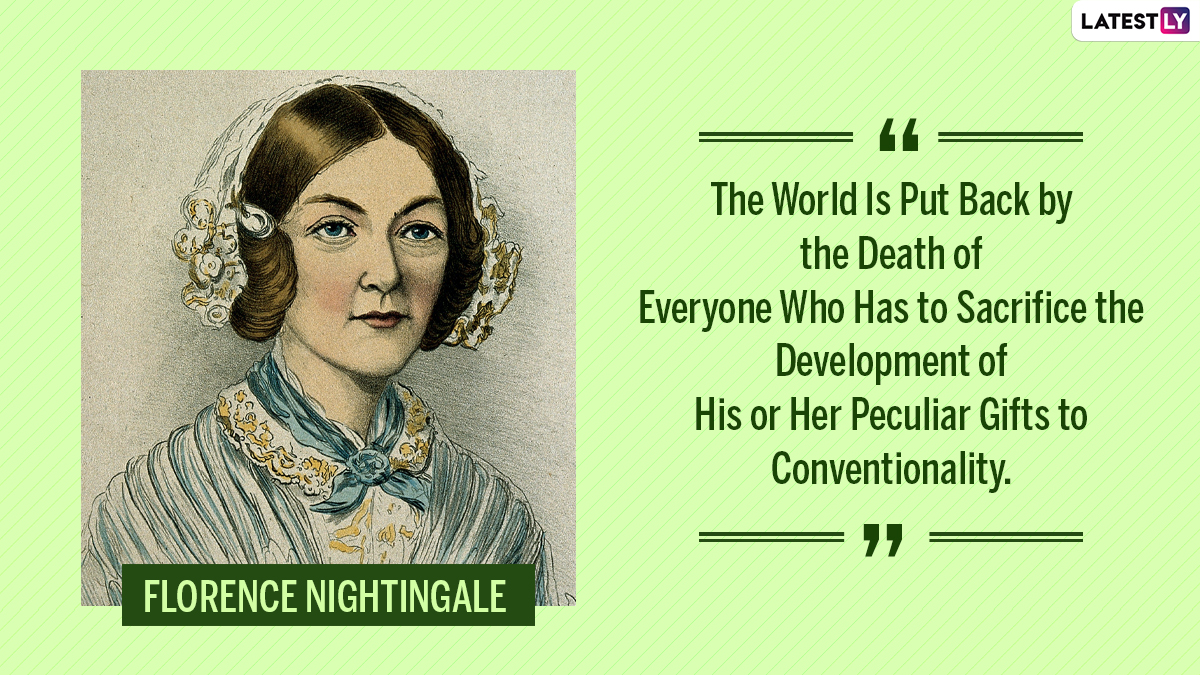 “The World Is Put Back by the Death of Everyone Who Has to Sacrifice the Development of His or Her Peculiar Gifts to Conventionality.” Florence Nightingale ` 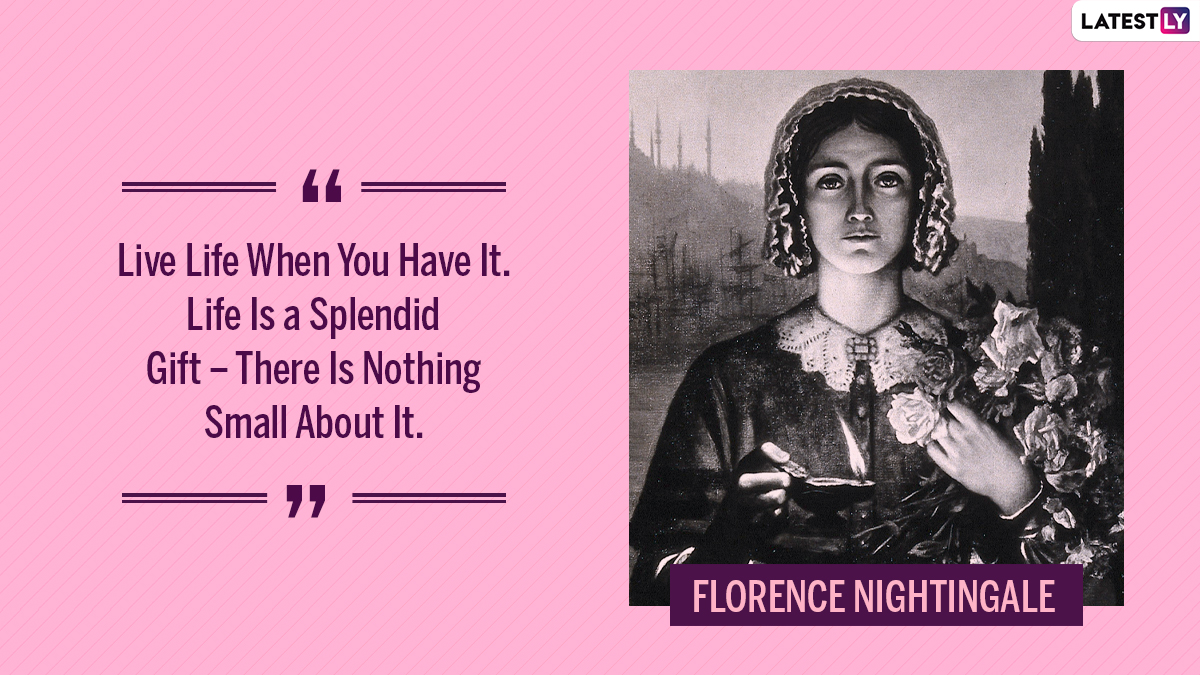 “Live Life When You Have It. Life Is a Splendid Gift – There Is Nothing Small About It.” Florence Nightingale 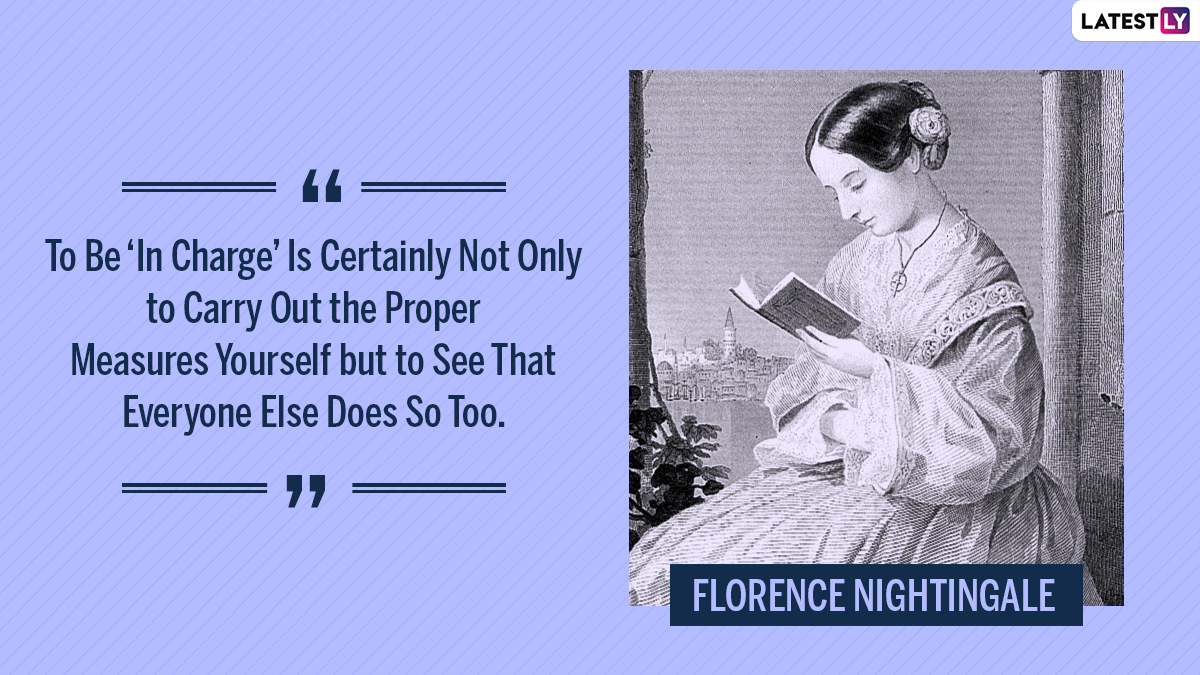 To Be ‘In Charge’ Is Certainly Not Only to Carry Out the Proper Measures Yourself but to See That Everyone Else Does So Too.” Florence Nightingale

In 1844, Nightingale enrolled as a nursing student at the Lutheran Hospital of Pastor Fliedner in Kaiserwerth, Germany. Then in the Crimean War, Nightingale received a letter from Secretary of War Sidney Herbert, asking her to organize a corps of nurses to tend to the sick and fallen soldiers. She arrived while she was stationed at Scutari, the British base hospital in Constantinople. There at night, she would walk among the beds, checking the wounded men holding a light in her hand. Thus earning her a nickname - Lady of the Night. The war gave her a perspective on sanitation and its effects to treat the sick. She dedicated her life to educating nurses until the age of 90 when she died. So in commemoration of her birth anniversary, share her quotes and be inspired to do some good in the world.

(The above story first appeared on LatestLY on May 12, 2021 08:04 AM IST. For more news and updates on politics, world, sports, entertainment and lifestyle, log on to our website latestly.com).